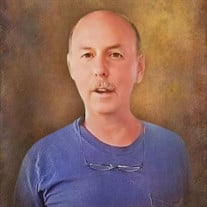 William Gerald “Butch” Helwig Sr. of Nanjemoy, MD died on May 1st, 2021 peacefully at his home from a terminal illness he fought hard for last 5 years. He was 60 years old. Born, September 25th, 1960, Butch was the son of the late Gerald Horace Helwig and Mary Dorothy Gray (Helwig). He was born and raised on his family’s farm, Helwig Farm, in Nanjemoy, MD. where him and his wife of 33 years, Tommie Leigh Helwig (Bean) also raised their 2 children together- daughter, Jessica Leigh Hayes (Helwig) and son, William Gerald “Billy” Helwig Jr., both of Nanjemoy, MD. In addition to his wife and children, Butch is survived by his grandchildren, MyLeigh Mae Hayes, LayLa Ann Hayes, and Marshall Wayne Hayes Jr., and son in law, Marshall Wayne Hayes Sr., of Nanjemoy, MD. He is also survived by Lee Matthew Tippett, of Nanjemoy, MD., who Butch considered to be like a son, as well as Austin Lee Tippett, Jimmy Matthew Tippett, and Jennifer Rose Tippett who Butch, “GranDaddy”, also considered to be like grandchildren. Butch was a well-known, genuine, kindhearted, selfless, dedicated, hardworking husband, father, and friend. He can be best remembered by his famous remarks “One More Time”, “Ohhh Nooo...”, and “Momma Said…”. Butch loved to laugh, crack jokes, “retell” memorable stories, and helping others. There was no doubt that he also enjoyed a good home cooked meal prepared by his late mother, Mary Dorothy, wife, Tommie, and/or his daughter, Jessica. Butch was passionate about hunting (especially duck hunting), fishing, crabbing, farming, spending time with his family, playing with his grandchildren, drinking a cold beer, and ensuring that everyone around him was happy! He touched many hearts, left those that knew him with many great memories, and will remain a legacy that will never be forgotten. Butch would work from sunup to sundown, 7 days a week, to provide for his family. He was the owner of a well-established and successful construction company, H&S Remodeling and Maintenance, LLC. Over the course of 30 years, Butch established a positive reputation with many locals in the area for whom he had the privilege of building custom homes, completing home additions, building garages/barns, remodeling, and other misc. carpentry/construction projects for. Butch was a “Jack of All Trades” and in addition to owning a construction company he was also a full time Farmer and Commercial Fisherman/Crabber. He dedicated many years to raising hogs and crops such as corn, wheat, and soybeans on his family farm in Nanjemoy. Butch also farmed several other farms in the Nanjemoy area with the assistance of his longtime friend, Walter Golden. Butch owned and operated with his childhood friend, Richard Stickel, H&S Seafood for several years in the 1980s and 1990s. Finally, many that remember Butch can recall him in his green John Deere Tractor on local roads as a grass cutting and snow removal contractor for Charles County Gov. for approximately 20 years. Visitation will take place on Thursday, May 13th, 2021 from 9:30 am-11:00 am at LaPlata United Methodist Church in LaPlata, MD with a prayer service being held at 11:00am. A burial service will be held at Old Durham Church in Nanjemoy, MD immediately following Visitations on May 13th. Pallbearers: Richard Stickel, Marshall Hayes, Lee Tippett, Austin Tippett, Jimmy Tippett, Richard Boswell, James “Chim” Zagrodnichek, and Robert “Bob” Berger. Friends and Family are invited to join the family to Celebrate Butch’s Life at Scotts Bar, in Welcome MD, May 13th, 2021, at 1:00 pm, following burial services. Face masks and social distancing are required. Memorial contributions may be made to Hospice of Charles County, 2505 Davis Rd, Waldorf, MD 20603.

The family of William Gerald "Butch" Helwig, Sr. created this Life Tributes page to make it easy to share your memories.

Send flowers to the Helwig, family.