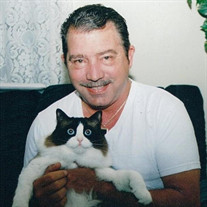 William George “Bill” Beadle, Jr., age 71, of Marbury, Maryland, passed away on January 29, 2021, He was born in San Diego, California on June 25, 1949 to the late William George Beadle, Sr. and the late Wanda Shirley (Hatton) Beadle. Bill was a Veteran of the United States Navy and worked for more than 40 years for the Department of Defense in Indian Head, Maryland. He was a longtime member of the Indian Head Moose Lodge and the La Plata American Legion. He enjoyed spending time with family, friends, and his cats. He also enjoyed boating, fishing, playing the Lottery, Pinball, shooting at the range, concerts, movies, and much more. Bill is survived by his wife, Kathy L. Beadle; son, William Beadle, III, and his wife Jennifer; and three grandchildren, Madeline, Griffin, and Jaxon Beadle. He is also survived by members of his wife’s family, including Terry Bullard (Sandy), Ron Hergett (Erin), Benny Hergett, Maggie Phillips, Cindy Hergett, John Hergett, Linda Habicht (George), and Barbara Hergett. He was also loved by 11 nieces and nephews and his lifelong friend, Dennis Budd. Funeral Services and Interment for Bill will be private. Bill will be interred at Maryland Veterans Cemetery in Cheltenham, Maryland at a later date. In lieu of flowers, memorial contributions are asked to the Humane Society of Charles County, P.O. Box 1015, Waldorf, Maryland 20604. May you Rest in Peace and know you will be missed everyday by the many that loved you.

The family of William George "Bill" Beadle Jr. created this Life Tributes page to make it easy to share your memories.

Send flowers to the Beadle family.