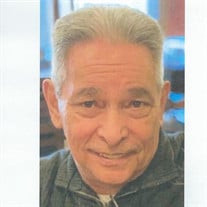 Walter “Walt” Lee Bucia, 77, of Bryans Road, Maryland, passed away on January 9, 2021 at the Washington DC VA Medical Center. Born on June 7, 1943 in Washington, DC, he was the son of the late Sixto David Bucia and Marie Nellie Bucia. Walt served in the U.S. Marine Corps as a Sergeant during the Vietnam Era. During his service, he was awarded the National Defense Service Medal, Vietnam Service Medal, Republic Vietnam Campaign Medal, Good Conduct Medal, Rifle/Sharpshooter Badge and a Purple Heart. Walt was honorably discharged in 1967. He spent his career as a blue collar worker (Meat Cutter, Dairy, Cashier, Driver and Territory Manager). Walt enjoyed movies, TV, home improvement shows and the Washington Football team. He was of the Catholic faith and attended St. Mary’s Catholic Church in Piscataway. In addition to his parents, Walt was preceded in death by his first wife Virginia Diane “Penny” Bucia; daughters Christine Pauline and Carolyn Michele Bucia; siblings: David Bucia, Ernio “Bobby” Bucia, Patricia Simmons, and Rose Cabbagestalk; nieces Wanda Hartley and Terry Ferris. He is survived by his wife Melissa Anne Bucia; children Caryn Nicole and Mathew Thomas Bucia and Erin Elizebeth Bucia-Jenkins; son-in-law Brandon Shaun Jenkins; grandsons Aidan and Evan Jenkins; nieces and nephews; Rick Donovan, Sheryl Norman, Jan Ferris, David “Little Davey” Simmons, Diana Lynn Hultz, Deborah Teed, Robert, Sean and Christopher Bucia. A visitation will be held on Wednesday, February 3, 2021 from 10AM until time of service at 12 Noon at the Raymond Funeral Service, P.A., 5635 Washington Avenue, La Plata, Maryland 20646. Per COVID-19 guidelines, masks are required and social distancing is still in place. While the funeral home is operating with limited capacity (25), we ask that all visitors be mindful of others. For others to attend there will be the ability to sign in under Zoom. Interment to follow at Cheltenham Veterans Cemetery. Per COVID-19 guidelines, masks are required and social distancing is still in place. The cemetery is allowing only ten (10) people total in the Committal Chapel but persons wanting to attend may follow the precession from Raymond’s to Cheltenham and park at the gravesite (B2) but remain in your car. There will be a large celebration next year once COVID-19 vaccinations have been given to the general public. Online condolences may be made on Mr. Bucia’s Tribute.

The family of Walter "Walt" Lee Bucia created this Life Tributes page to make it easy to share your memories.

Send flowers to the Bucia family.