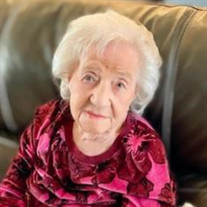 Violet was born to Henry and Rebecca Jones Kemper in Allegheny County, Virginia in 1924 and came to Washington, D.C. at 18. She retired from A&P after many years as a bookkeeper and enjoyed many more years of retirement. She loved family get-togethers,... View Obituary & Service Information

The family of Violet Kemper Males created this Life Tributes page to make it easy to share your memories.

Violet was born to Henry and Rebecca Jones Kemper in Allegheny...

Send flowers to the Males family.