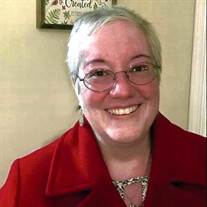 Traci (DeDominicis) Renner died September 3, 2021 surrounded by family in her Waldorf home following more than two years of fighting breast cancer. A native of Clinton, Traci was born May 27, 1965 at Malcolm Grow Medical Center. She was the second daughter of John and Ann (Hurley) DeDominicis who preceded her in death in December 2014 and August 1989. She was also preceded in death by her in-laws, Robert and Betsy (Keim) Renner of Chalfont, Pennsylvania in January 2005 and July 2016, respectively. Traci is survived by her husband, Craig; daughters, Lindsay Renner-Wood and husband, Brian Wood of Frostburg and Kelsey Renner and partner Michael Manzi of Northampton, Massachusetts. She is also survived by her sisters, Maura Betler and husband, Scott of Scottsdale, Arizona and Cara DeDominicis of Austin, Texas, along with brothers, John DeDominicis and wife, Mary of Macungie, Pennsylvania and Michael DeDominicis and wife, Andrea of Atlanta, Georgia. Traci’s memory also carries on in many well-loved sisters- and brothers-in-law, nieces, and nephews. Traci attended and graduated from Surrattsville High School in 1983 where she was class secretary for her entire tenure and from York College of Pennsylvania in 1987. While enrolled at York, Traci and Craig met in bowling class and started dating in December 1984. They got engaged quickly and were married on June 20, 1987 in Clinton at St. John the Evangelist and lived briefly in Pennsylvania before moving to Waldorf in 1988. In addition to her large and loving family, Traci’s legacy will live on in the hearts of the staff and students at Archbishop Neale School in La Plata. She began volunteering in the ANS library when her daughters were enrolled in elementary school there and began working full-time as the librarian in 2001. Mrs. Renner, as she was known to hundreds of students and their families over the years, saw the library through the rebuilding process after the 2002 tornado that struck La Plata and destroyed the school completely. She took great care when selecting books with which to line the library shelves and in designing engaging lesson plans and classroom activities for students and proved to be a strong example of the Catholic faith. In 2020, she won the Readers’ Choice award for best teacher in the Maryland Independent. Along with her job at ANS, which she considered more of a vocation, Traci loved spending time with her family — both immediate and extended — entertaining whoever walked through the front doors of her home and taking trips with Craig and the girls. Together, they took long, memorable car trips to Florida, Texas, and frequently to Craig's family near Philadelphia. She loved rooting for the Phillies and she and Craig attended games in Washington and Philly often. Among many other things, Traci loved telling people about the time she sang on stage with Sting, British television, Jane Austen books, tea and dark chocolate. It is hard to pick what her family and friends will miss most about her. Traci was a warm and loving woman with a presence that filled the room and a laugh to match. She had a sharp and quick wit and often made herself laugh, remarking that she was “the funniest person (she) knew.” She sewed Halloween costumes and crafted handmade paper flowers for Lindsay's wedding, baked ornate birthday cakes and cooked delicious food in large portions, and taught her daughters both strength and tenderness. She was a unique example of love and generosity and will be missed forever. There will be a Visitation on Friday, September 10, 2021 from 4-8PM with a Prayer Service at 7PM at Raymond Funeral Service, 5635 Washington Avenue, La Plata, Maryland. There will be a Mass of Christian Burial on Saturday, September 11, 2021 at 11AM at Sacred Heart Catholic Church, 201 St. Mary's Avenue, La Plata, Maryland 20646. The Interment will be on Monday, September 13, 2021 at 11AM at St. Joseph’s Catholic Church Cemetery, 4590 St. Joseph Way, Pomfret, Maryland 20675. In lieu of flowers, please make donations to https://gofund.me/1062bde2 . The family would like to thank nurse Bev and home health aide Nikki with Hospice of the Chesapeake for their aid in the last weeks of Traci’s life.

Traci (DeDominicis) Renner died September 3, 2021 surrounded by family in her Waldorf home following more than two years of fighting breast cancer. A native of Clinton, Traci was born May 27, 1965 at Malcolm Grow Medical Center. She was the... View Obituary & Service Information

The family of Traci Ann Renner created this Life Tributes page to make it easy to share your memories.

Send flowers to the Renner family.