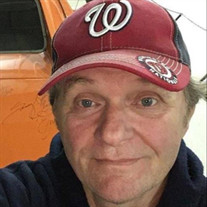 Timothy Lee Pasternak, 65, of Port Tobacco, Maryland, passed away on December 18, 2020 at his home. Born on December 15, 1955 in Weston, West Virginia, he was the son of Lorena G. Pasternak and the late Joseph T. Pasternak. Fondly known as Tim and Turtle, he served in the U. S. Navy during Operation Desert Storm until he was Honorably Discharged in 1995. Tim worked as an aircraft mechanic for DynCorp International for 20+ years. Tim loved his family and friends and went out of his way for each and everyone. He loved history, especially the Civil War era, visiting museums, the Beatles, the Washington Senators (Nationals) baseball team, going to yard sales and finding the most unusual items. Tim earned the nickname “The Yard Sale King” because of his many incredible finds. In addition to his father, he was preceded in death by his nephew Jason Pasternak. In addition to his mother Lorena, Tim is survived by his daughter Christina M. McGann, son in-law Ryan McGann, son Jeremy L. Pasternak; brother Joseph R. “Joey” Pasternak and his wife Susan; niece Bonnie Shoemaker, her husband Rick and great niece Katie and great nephew CJ; his former wife Wanda Pasternak; and two fur grandbabies. A visitation will be held on Monday, December 28, 2020 from 2 - 4pm with a service at 4pm at the Raymond Funeral Service, P.A., 5635 Washington Avenue, La Plata, Maryland 20646. A church service will be held at LifeStream Church on Friday, January 8th, 2021 from 9:00-10:30am, at 5105 Leonardtown Road, Waldorf, MD 20601. A private interment will be held at Cheltenham Veterans Cemetery on January 8th, 2021. In lieu of flowers, memorial contributions may be made to the Rescue Angels of Southern Maryland, P. O. Box 51, White Plains, Maryland 20695 or at www.rescueangelssomd.com. Condolences may be made at Tim’s Tribute Wall.

Timothy Lee Pasternak, 65, of Port Tobacco, Maryland, passed away on December 18, 2020 at his home. Born on December 15, 1955 in Weston, West Virginia, he was the son of Lorena G. Pasternak and the late Joseph T. Pasternak. Fondly known as... View Obituary & Service Information

The family of Timothy Lee Pasternak created this Life Tributes page to make it easy to share your memories.

Send flowers to the Pasternak family.