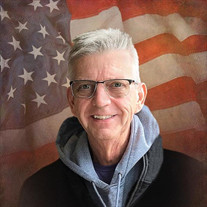 Thomas (Tom) Michael Keim, 61 of Waldorf, MD, passed away peacefully at his home on Wednesday, July 28, 2021 surrounded by his family. In November of 2018, Tom was diagnosed with Pancreatic Cancer and proceeded to fight through multiple surgeries, chemotherapy, and radiation until no more treatments were available. He is survived by his loving wife, Judith (Snow) Keim, and his two sons, Thomas Jr. (Kellie), and Robert (Madison). Tom is also survived by his five siblings, Janet Shodder of Sewell, NJ, Barbara Langley (Richard) of Newington, CT, Theresa Haworth (Gary) of Searsboro, IA, Loretta Wood (William) of Sewell, NJ, and William Keim (Cerise) of Lexington, MA, as well as many nieces and nephews. Tom was born in January of 1960 in Camden, NJ, the youngest of six children to the late William and Christa (Alscher) Keim. After graduating from Tiverton High School in 1978, he enlisted in the Air Force where he served honorably for 4 years, including time spent overseas in San Vito, Italy. After exiting the Air Force, Tom attended the Control Data Institute in Philadelphia, near his hometown, and received a two-year degree in Programming and Operations. Tom was hired out of technical school to work as a software engineer for PRC in Omaha, Nebraska. In 1985, Tom moved to Virginia Beach where he continued to work as a software engineer at the Norfolk Naval Base. Tom met Judith via a mutual friend in Virginia and they have been married for over 30 years. In the summer of 2002, Tom and his family moved to Waldorf, MD where they have resided since. Tom worked for Cyber Cloud Technologies LLC (previously worked for Northrop Grumman, L3 and CACI) at the Office of Naval Intelligence in Suitland, MD for the past 19 years. Tom was a loving husband and father. He will be remembered for always putting others before himself, for his overwhelmingly positive attitude, and for his smile and sense of humor. Tom enjoyed coaching and attending his sons’ sporting events, watching baseball and football, playing pinochle, drinking craft beer and red wine, eating Amish apple cider donuts, and spending time with friends and the family cats. He also enjoyed cruising and vacationing with his family, frequenting places such as Williamsburg, VA, Hilton Head Island, SC, and Orlando, FL. Visitation on Monday, August 2, 2021 from 10:00AM until time of Memorial Service at 11AM at Raymond Funeral Service Chapel, 5635 Washington Avenue, La Plata, MD 20646. Interment will be private. In lieu of flowers, memorial donations may be made to the Lustgarten Foundation for Pancreatic Cancer Research or Last Chance Animal Rescue in Waldorf, MD.

Thomas (Tom) Michael Keim, 61 of Waldorf, MD, passed away peacefully at his home on Wednesday, July 28, 2021 surrounded by his family. In November of 2018, Tom was diagnosed with Pancreatic Cancer and proceeded to fight through multiple surgeries,... View Obituary & Service Information

The family of Thomas Michael Keim created this Life Tributes page to make it easy to share your memories.

Send flowers to the Keim family.