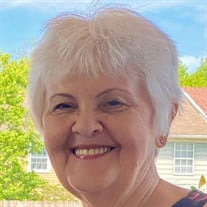 Sandra &#8220;Sandy&#8221; Marie (Borys) Tucker was born August 8, 1947. She was the eldest daughter of Alex and Amelia Borys. She will be lovingly missed by her husband of 42 yrs, Douglas; children, Xenia of Seattle, WA, Tammie (Jeff) Lauer... View Obituary & Service Information

The family of Sandra "Sandy" Marie Tucker created this Life Tributes page to make it easy to share your memories.

Send flowers to the Tucker family.