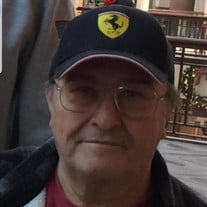 Salvatore Carnucci Sr., 72, of Waldorf, Maryland, passed away on Saturday, April 3, 2021 at the University of Maryland Charles Regional Medical Center in La Plata, Maryland. Born on August 25, 1948 Cutro, Calabria, Italy, he was the son of the late Tomas Carnucci and Elizabeth Carnucci. Mr. Carnucci came to the United States in 1961 and became an American citizen in 1975. He worked for Safeway for many years as a Fork Lift Operator until he retired. He was known as a person with a great sense of humor and loved spending time with his family. Salvatore Carnucci was very proud of his family. He was of the Catholic faith and attended St. Joseph Catholic Church in Pomfret. In addition to his parents, Mr. Carnucci was preceded in death by his brothers Tony and Alfonso. He is survived by his wife of 46 years, Eugenia Carnucci; sons Frank (Jaime), Tony (Sherri), Alfonso and Salvatore Jr.; grandchildren Domenico, Aysa and Autumn; sister Anna (Gary) Pierpont; brothers Frank, Joe (Lulu) and Hugo. A visitation will be held on Tuesday, April 13, 2021 from 10AM until time of Mass at 11AM at St. Joseph Catholic Church, 4590 St. Joseph Way, Pomfret, Maryland 20675. Due to COVID19 Restrictions, mask must be worn and social distancing is in place. Upon the Church reaching Seating Capacity, the family welcomes guests to join them at the graveside. Interment to follow in the church cemetery. Pallbearers are Frank Carnucci, Tony Carnucci, Alfonso Carnucci, Salvatore Carnucci Jr., Nico Carnucci, Gary Pierpont and Sean Pierpont; Honorary Pallbearers are Mike Carnucci, Tommy Carnucci, Mark Carnucci, Eric Carnucci, and Mike Carnucci. In lieu of flowers, memorial contributions may be made in Mr. Carnucci’s name to American Diabetes Association, P. O. Box 15829, Arlington, VA 22215 or National Kidney Foundation, Finance Department, 30 East 33rd Street, New York, NY 10016. Condolences may be made on Mr. Carnucci’s Tribute Wall.

Salvatore Carnucci Sr., 72, of Waldorf, Maryland, passed away on Saturday, April 3, 2021 at the University of Maryland Charles Regional Medical Center in La Plata, Maryland. Born on August 25, 1948 Cutro, Calabria, Italy, he was the son of... View Obituary & Service Information

The family of Salvatore Carnucci created this Life Tributes page to make it easy to share your memories.

Send flowers to the Carnucci family.