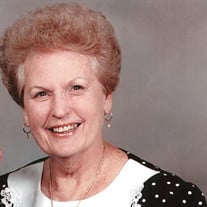 Ruth Elizabeth McIntyre Oden, 95, of Brandywine, MD, passed away on July 10, 2021 at Georgetown University Hospital. Ruth was born on January 27, 1926 in Alexandria, Virginia, to the late James Henry and Ruth Elizabeth Davis McIntyre. She was educated through the Alexandria School System, and later went on to LPN school. Her first job was a sales clerk at a dry cleaner when she was 16. She later worked as an operator for the phone company. Before marrying her husband Norman, she went to work for the Signal Core for the Army at the Pentagon during the war. She was working the night shift when Norman returned from the war and they decided it best that she quit working to stay home and raise their children. In 1963 she went to nursing school. After nursing school, she worked at Fairfax Hospital until their family moved to Maryland in which she began working at Cafritz Hospital, later known as Greater Southeast Hospital. Ruth married Norman Stanley Oden, Jr. on August 29, 1943 in Elkton, MD. They had three children, Norman Stanley III, Cynthia Ann, and Stephen Leslie. Ruth and Norman made their home in Fairfax, Virginia where they raised their family until moving to Maryland in the early 1960’s. Her hobbies were reading and knitting, she has given her family many precious knitted heirlooms that she made with her loving hands. She enjoyed spending time with her family and was most proud of each of them. In addition to her parents and her husband, Norman Stanley Oden, Jr. she is preceded in death by her son, Norman Stanley Oden, III and granddaughter, Valerie Cather. She is survived by her daughter, Cynthia A. Gallucci (Lynden), son, Stephen L. Oden (Hope), Grandchildren; Jennifer L. Wise, Rebecca Oden, Pamela Burns (Robert), Erica Hall (Brian), and Lindsey Green (Toby), Great-Grandchildren; Brenton, Heather, and Whitney Underwood, Vanessa, Ava, and Olivia Burns, Riley, and Emily Hall, and Tristin, and Regan Green, and Great-Great-Grandchildren; Everly, and Levi Dean and a 3rd due in December. Friends will be received on Wednesday, July 21, 2021 from 2-4 PM and from 6-8 PM at Raymond Funeral Service, 5635 Washington Avenue, La Plata, MD 20646, where a service will be held at 11:00 AM on Thursday, July 22, 2021. Interment will follow the service at Trinity Memorial Gardens, Waldorf, MD.

Ruth Elizabeth McIntyre Oden, 95, of Brandywine, MD, passed away on July 10, 2021 at Georgetown University Hospital. Ruth was born on January 27, 1926 in Alexandria, Virginia, to the late James Henry and Ruth Elizabeth Davis McIntyre. She was... View Obituary & Service Information

The family of Ruth Elizabeth Oden created this Life Tributes page to make it easy to share your memories.

Send flowers to the Oden family.