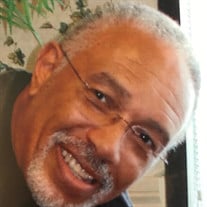 Today, we celebrate the home going of Rufus Ray Henderson, Jr. He was granted his angel wings on Thursday, February 24, 2022, at his home in Waldorf, Maryland. Rufus was born on Monday, June 2, 1941, in Lafayette, Louisiana, to Rufus R. Henderson, Sr. and Agnes Mack. As an infant, on June 14, 1941, Rufus was baptized at Saint Paul the Apostle Catholic Church and given the name “Joseph” Rufus Ray Henderson, Jr. during the baptism. Later that year, the Henderson family moved to San Francisco, California. Rufus received his primary and secondary education through the San Francisco Public School System. After graduating from Balboa High School, he attended San Francisco City College. He later married his first wife, Martha Davis, and they had a son, Robert, and a daughter, Marcie, together. In 1989, Rufus met and later married Elvernetta (Elva) Coleman. In this union two families were joined together as one, resulting in a blended family of one son and four daughters. Rufus spent his professional career with Safeway Stores Inc. and the Bay Area Rapid Transit. He received numerous awards, certificates of recognition, and was highly regarded throughout his career. He was passionate about supporting various causes related to his community, career and church. On May 3, 2009, Rufus joined and was baptized at Beth Eden Baptist Church in Oakland, California. It was a particularly special day, since he joined on a Sunday in which Elva directed the Sanctuary Choir. After becoming a member of the church, he immediately joined the Men’s Sunday School class and the Men’s Choir. One of his most cherished accomplishments was leading the multi-million dollar fundraiser campaign for the church’s Family Life Center. Rufus loved the Beth Eden family and looked forward to attending church. Rufus loved celebrating holidays, birthdays, and sporting events. He was a die-hard sports fan who fervently supported the San Francisco 49ers and the Golden State Warriors, win or lose. He was also a numismatist, photographer, imprinter, coach of softball and basketball, and a martial arts instructor. Additionally, he was a skilled Bid Whist and Free/Cell Solitaire player. Rufus volunteered his services at music festivals, expos, and received a plethora of awards. Despite all of this, what he loved most of all was to be surrounded by his many family members and friends. Rufus was a devoted son, husband, father, and a friend to all he met. He was affectionately referred to as “Poppa” by his grandchildren. Although we gather today to celebrate Rufus’ life and birth into eternity, he will always be fondly missed by his loving wife, Elvernetta; son, Robert; daughters Marcie, Vangie (Kelvin), LaNell (Larry) and Marindy; seven granddaughters Mauriauna, Taylor, Nielah, Brooke, Tahj, Sascha and Shelby; two grandsons Carter and Larry, III; and one great-granddaughter to arrive this summer. A visitation will be held on Wednesday, March 16, 2022 from 4PM until time of the memorial service at 6PM at the Raymond Funeral Service, P.A., 5635 Washington Avenue, La Plata, Maryland 20646. The family asks that those attending the memorial service to wear their favorite sports attire. A celebration of Rufus’ life will be held at Beth Eden Baptist Church in Oakland, CA with interment at Oakmont Memorial Gardens in Lafayette, CA at a later date and time, to be announced. "In lieu of flowers memorial contributions may be made to the Beth Eden Baptist Church Family Life Center, 1183 - 10th Street, Oakland, California 94607. Please include in the memo line "In memory of Rufus Henderson".

Today, we celebrate the home going of Rufus Ray Henderson, Jr. He was granted his angel wings on Thursday, February 24, 2022, at his home in Waldorf, Maryland. Rufus was born on Monday, June 2, 1941, in Lafayette, Louisiana, to Rufus R. Henderson,... View Obituary & Service Information

The family of Rufus Ray Henderson created this Life Tributes page to make it easy to share your memories.

Send flowers to the Henderson family.