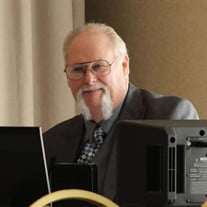 Ronald “Ron” Fairfax Chambers, 72, of Upper Marlboro, MD, died on January 9, 2022 at Anne Arundel Medical Center. Ron was born on January 21, 1949 in Washington, DC to the late Pauline Elizabeth (Dindlebeck) and Robert Alexander Chambers. Ron was a credit manager for Atlantic Electric Corp for 24 years. He played the drums in the Sweet Water Band, honoring Elvis with Michael Hoover and he was a DJ. He enjoyed traveling, bowling both duck pin and ten pin, turkey shoots, and playing pool. He was a sportsman having played football, baseball and wrestling in his younger years. He was devoted to St. Mary’s Landing in Charlotte Hall. He loved to tell jokes and make people laugh. Above all he loved his children and grandchildren. In addition to his parents, he is preceded in death by his brothers; Paul and Philip Chambers, Sisters; Dawn Perrero and Terri Dawson. He is survived by his son, Ronald J. Chambers and his wife Jan, daughter, Valarie Chambers, grandchildren; Ny’Jaiah Hatton, Kaleyah McPherson, and Julius Chambers, Niece, Mala Bansal and her son Emmett Cornwell, nephew, Michael Bansal, and family friend that Ronald considered a son, Darren Bannister. A Celebration of Life will be on Tuesday, January 25, 2022 at 12:00 PM at the Waldorf Moose Lodge, 4765 Robert S. Crain Hwy, White Plains, MD 20695.

The family of Ronald "Ron" Fairfax Chambers created this Life Tributes page to make it easy to share your memories.

Send flowers to the Chambers family.