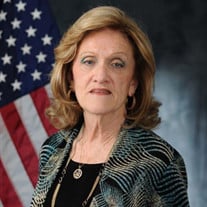 Roberta Lee Gonzales, 72, of Waldorf, Maryland, passed away on April 2, 2021 at the Genesis Healthcare Center in La Plata. Born on June 30, 1948 in Lowell, Massachusetts, she was the daughter of the late Frank Monson and Helena Pizzano Monson. Mrs. Gonzales grew up in Lowell, Massachusetts and attended local schools. She graduated from Andover Business College, where she was the editor of the school newspaper. Mrs. Gonzales began her civil service career as a medical secretary with the Veterans' Administration. As a military wife, she moved to California and then on to Nebraska. Bobbie joined the JAG family in 1971 as a claims clerk at Strategic Air Command at Offutt AFB, Nebraska, taking on the management of the centrally funded claims budget program for thirty assigned base offices. Her next move was to Florida in 1975, where she worked as a transportation assistant for the Army at Cape Canaveral. Bobbie moved to Maryland in 1979 and spent a year working at the Andrews civilian personnel office before rejoining the JAG family as a Claims Examiner in June 1980. She was the assistant claims officer and administrator for the hospital recovery and tort claims programs. Bobbie spent a "brief" 27 years at the Andrews legal office before moving to her current position at the medical facility in August 2007. Mrs. Gonzales was part of the AFLOA/JACC Medical Law Field Support Center. She was assigned as the medical law paralegal for the 11th Medical Group, Malcolm Grow Medical Clinics and Surgery Center, Joint Base Andrews, Maryland. In addition to the office management, Bobbie performed legal research and review of training affiliation agreements, medical group instructions, operating instructions, and numerous other issues that impact the base medical facility and the five regional bases serviced by the Joint Base Andrews regional medical law consultant. She tracked the regional medical malpractice claims filed and plans and oversees the work schedules and administrative requirements for one reserve attorney. Mrs. Gonzales earned numerous awards during her work experience including the 79th Medical Wing Category II Civilian of the Quarter (July-September 2016), AFLOA/JACC Mid-Level Civilian of the Quarter (January-March 2014), Air Force District of Washington Outstanding Legal Service Civilian of the Year for 2006, 316th Wing Category I Civilian of the Year for 2006, 89th Airlift Wing Category I Civilian of the Year for 2002, and Sustained Superior Performance Awards/Quality Service Increase Awards (1969-2006). With her husband Joe, Mrs. Gonzales enjoyed league and competitive tournament bowling as well as spending time with their grandchildren. She is survived by her husband, Joe, who is a senior budget analyst with the Air National Guard Bureau; son Eric J. Bedard, his wife Ann and their sons Kyle, Thomas, and Brian; step-children Shelly Kramer, Joe Gonzales and his wife Sherry, Jim Gonzales and his wife Toni; five grandchildren and seven great grandchildren; also survived by many members of the Pizzano family, other relatives and friends. A visitation will be held from 11AM to 1PM on Wednesday, April 21 at Raymond Funeral Service, P.A., 5635 Washington Avenue, La Plata, Maryland 20646. Per COVID-19 guidelines, masks are required and social distancing is still in place. While the funeral home is operating with limited capacity (5O), we ask that all visitors be mindful of others. Service and interment will be held at 1:45PM at Cheltenham Veterans Cemetery. Memorial contributions may be made to Susan G. Komen® 13770 Noel Road, Suite 801889, Dallas, TX 75380.

Roberta Lee Gonzales, 72, of Waldorf, Maryland, passed away on April 2, 2021 at the Genesis Healthcare Center in La Plata. Born on June 30, 1948 in Lowell, Massachusetts, she was the daughter of the late Frank Monson and Helena Pizzano Monson.... View Obituary & Service Information

The family of Roberta Lee Gonzales created this Life Tributes page to make it easy to share your memories.

Roberta Lee Gonzales, 72, of Waldorf, Maryland, passed away on...

Send flowers to the Gonzales family.