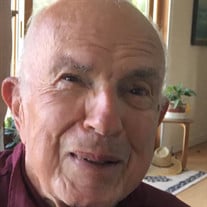 After 21 years of battling Parkinson’s disease, Dr. Robert (Bob) Edgar Pennington of Vienna, Virginia passed away peacefully on September 29, 2020 at the University of Maryland Charles Regional Medical Center in La Plata, Maryland in the presence of his friend and caregiver, Anders Lundegård. Bob was 88. Bob was born in West Line, Missouri, the third son of the late William Ray Pennington and Edna Marie Pennington (née Johnson). On Thanksgiving Day in 1931, Edna Marie thought she had overeaten at her sister-in-law’s restaurant. But instead, her water broke and Bob was born the following day. At a young age, his mother realized Bob’s aptitude for music and provided for piano lessons. Bob went on to study classical piano at Northwestern University in Evanston, Illinois where he attained his Undergraduate as well as Master’s and Doctoral degrees in music. He served on the faculty of West Chester University of Pennsylvania as a piano professor for 39 years, from 1966-2005. During these years, he also spent the summer months in Vienna, Austria where he often practiced at the Bösendorfer showroom and so became a well-known profile to the residents of Vienna. This classical music capital became his second home where many locals adopted him as the visiting American professor of piano. Endless dinner invitations and concert events became Bob’s alter existence in contrast to his disciplined teaching schedule at West Chester University. Upon learning of his Parkinson’s diagnosis in the summer of 1999, Bob, unable to mask his declining piano technique, cancelled his trip to Vienna and the 30-plus yearly tradition of practicing at the Bösendorfer headquarters and instead remained at the West Chester Campus for the summer. In doing so, Bob befriended a Swedish visiting saxophone instructor, Anders. They initially bonded over the translation of Bob’s maternal grandmother’s baptismal certificate from Fyrunga, Sweden. The following summer, Bob and Anders set out on an ancestry trip to Sweden where they together met up with distant cousins of Bob and his late mother Edna Marie. In the years to come, Bob became the mentor, steadfast friend and kindred spirit of Anders. After retiring from West Chester University in December of 2005, Bob followed in Anders’ footsteps and relocated to Vienna, Virginia on the outskirts of Washington, DC. In retirement, Bob took in all of what the Washington metropolitan area had to offer in terms of music, the arts and, most especially, friends and good food. As his Parkinson’s symptoms increased, he was surrounded by his extensive, eclectic collection of books and his in-house devoted caregiver, Anders. Until recent times, despite his physical limitation, Bob maintained his fluency of German by attending weekly local foreign language conversation groups. His classmates became an integral part of his life as they cheered him on which, with all certainty, helped keep his debilitating condition at bay. Bob was predeceased by his oldest and youngest brothers, Bill and Jim. He is survived by his older brother, Richard, and by Linda, the wife of his late brother, Jim, as well as nieces and nephews. Bob will be laid to rest next to his parents at the Palestine Cemetery in Kansas City on his birthday, November 27, the day after Thanksgiving. A memorial service for friends and acquaintances will be held in the Washington, DC area at a later date in 2021. In lieu of flowers, please consider a charitable donation to a musical organization of your choice.

The family of Robert Edgar Pennington created this Life Tributes page to make it easy to share your memories.

Send flowers to the Pennington family.