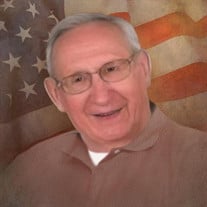 US Army Colonel (Ret) Robert H. Parrish of La Plata Maryland, passed away from complications due to Covid 19 on January 7, 2022. The 103-year-old native son of Maryland was born on July 12th, 1918, in Baltimore Maryland, to Howard and Ruth Parrish. He was the older of two sons raised in Baltimore during the periods of both the Roaring 20’s and the Great Depression, he graduated from Baltimore’s Polytechnic Institute where he honed both his scholarship and athletic prowess as a boxer. In 1941 he joined the US Army reporting to training the day after Peral Harbor. He went from Private to Master Sergeant by wars end. During the Post War era he joined the Army Reserve and received an Officers Commission. On October 24th, 1947, he married the love of his life, neighbor Mary Thompson. They settled in Baltimore, Maryland. Their life of peace and prosperity in Baltimore was interrupted by war when Robert was recalled to active military duty to serve in the Korean War. At wars end he decided to make the Army his career and remained on active duty for the next 20 years. During this twenty-year’s period he received his degree from the University of Maryland and served two combat tours in Vietnam, to include the Tet Offensive in 1968, where he was awarded the Bronze Star for his actions during the offensive. His thirty years of Army service ended with his retirement as a Colonel in 1971. Following his military service Robert worked for the State of Maryland’s Department of Rehabilitation in Baltimore serving as an instructor to handicap students in Jewelry and watch repair. Retiring a second time after state government service he spent his time with family, rooting for the Colts than the Ravens, visiting the cottage on the Potomac and gardening which was his passion, he was enormously proud of his certification as a Master Gardner he loved the land. As a member of the Greatest Generation, he was a gentleman of true grit, devoted to his family, his God and country. Robert is survived by daughters Jane Richard (Joseph) and Linda Parrish both of La Plata and retired educators with the Charles County Maryland School System, Grandsons Christopher R. Richard (Kristin) of Annapolis Maryland and Major Robert J. Richard, US Army (Kristie) of Fort Bragg North Carolina. Additionally, Robert is survived by his much loved five great grandchildren, Austin, Luke, Alexander, Tyler, and Evangeline Richard. He was preceded in death by wife Mary, and brother Raymond WWII Navy Veteran. Services will be private with internment at Arlington National Cemetery at a later date. In lieu of flowers, the family requests donations be made to the Fisher Center for Alzheimer’s Research Foundation, https://www.alzinfo.org/about/

US Army Colonel (Ret) Robert H. Parrish of La Plata Maryland, passed away from complications due to Covid 19 on January 7, 2022. The 103-year-old native son of Maryland was born on July 12th, 1918, in Baltimore Maryland, to Howard and Ruth Parrish.... View Obituary & Service Information

The family of Robert Howard Parrish created this Life Tributes page to make it easy to share your memories.

Send flowers to the Parrish family.