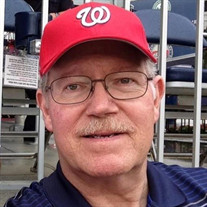 Robert "Bob" W. Harry, of Haymarket, Virginia, and formerly of White Plains, Maryland, passed away peacefully on Tuesday, August 24th, 2021, at the age of 71. He was the son of the late William and Grace Harry of Oxon Hill, Maryland. Born on May 27th, 1950 in Washington D.C., Bob grew up in Oxon Hill, Maryland, and spent much of his childhood and teen years playing baseball, drawing, painting, and playing his guitar. He graduated from Oxon Hill High school in 1968 and enlisted in the United States Navy shortly thereafter, where he traveled around the world on the aircraft carrier the U.S.S. America and was a veteran of the Vietnam War. After completion of his military service and achieving the rank of Petty Officer 3rd class, Bob began a 33-year career at the Bureau of Engraving and Printing (BEP) in Washington D.C. During his tenure, Bob played a significant role in the development of US currency redesign that took effect in the early 2000s, traveled to Germany to assist with new printing press selection, and traveled to England as part of an anti-counterfeiting cooperation effort between the US and the UK. Most importantly to him, Bob established a performance evaluation system at the BEP where employees are rewarded for "doing the right thing." In 1990, Bob obtained his Real Estate license and began his career as a Realtor, serving the Washington D.C. area for the next 30 years. He earned numerous production and quality service awards, developed the successful Real Estate team, "Bob Harry's Residential Sales Group," and was amongst the Top Producing Realtors with Century 21 Real Estate, LLC, both locally and Nationwide. While his professional accomplishments were many, Bob was most well-known for his commitment to family, sense of humor, positive attitude, strong work ethic, and service to others. Friends often remarked that Bob “never met a stranger,” had the “gift of gab,” and that he possessed the rare quality of making others around him feel happy. Bob believed vehemently that all people should be treated equally, regardless of their race or socioeconomic status, and he found joy in volunteering his time with Habitat for Humanity of Charles County, serving as President from 2003-2006. Bob was an avid Washington Nationals fan, loved to golf, dance, and travel, and his faith was very important to him as well, having devoted himself to Christ in 2003. Bob is survived by his wife of 30 years, Paula Harry, his children Ryan Harry (Angela), Michael Harry (Leanne), Erin Barber (Craig), Randy Davila (Rachel), and Elizabeth Credno (Chris); His grandchildren Olivia, Abigail, Nathan, Alyssa, Alexandra, Tristan, Cameron, Landon, Hannah, Nicole, John Paul, Mia, Charlie, and Marshall; His great-grandchildren Ryder and Oaklynn; His sister Valerie Bolender (Lamar), and numerous cousins and many great friends. In addition to his parents, he was preceded in death by his younger brother, James Harry. Services will be held on September 25th, 2021 at Raymond Funeral Home in La Plata, Maryland. Visitation is from 1-3 pm and a memorial service will be held at 3pm. Interment will be at a later date at Arlington National Cemetery. In lieu of flowers, please send donations to either the Vietnam Veterans of America at www.vva.org or St Jude Children’s Hospital at www.stjude.org Bob will be greatly missed by so many.

Robert "Bob" W. Harry, of Haymarket, Virginia, and formerly of White Plains, Maryland, passed away peacefully on Tuesday, August 24th, 2021, at the age of 71. He was the son of the late William and Grace Harry of Oxon Hill, Maryland. Born... View Obituary & Service Information

The family of Robert Wayne Harry created this Life Tributes page to make it easy to share your memories.

Robert &quot;Bob&quot; W. Harry, of Haymarket, Virginia, and formerly of...

Send flowers to the Harry family.