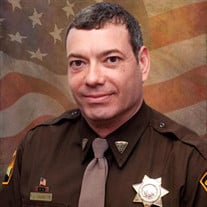 In Memory of Master Corporal Robert Jason Cadrette, Charles County Sheriff's Office It is with great sadness that we announce the passing of our beloved father, son, brother, husband and public servant, Master Corporal Robert Jason Cadrette, who died in the evening hours on December 5, 2020 from complications associated with COVID-19 at MedStar Washington Hospital Center in Washington, D.C. Robert is survived by his mother, Jean Marie Cadrette; his wife Elaine Cadrette (neé McSweeney); his daughter, Olivia Rose Cadrette, his sister, Anne Marie Kuonen, his nieces, Larissa Anne and Karina Michelle Kuonen, and his cousin, Diane Gilbert. He is predeceased by his father, Robert Lawrence Cadrette, his maternal grandfather Nicholas Bogosta, his maternal grandmother Anna Bogosta, his paternal grandfather Buster Cadrette and his paternal grandmother, Ramona McCarthy. Robert was born on July 3, 1969 in Binghamton, New York, to Jean Marie Bogosta and Robert Lawrence Cadrette. He graduated from the University of Maryland, College Park with a degree in Criminal Justice, and joined the Charles County Sheriff’s Office on January 30, 1998. From 1998 to 2007, he worked in Patrol Operations. Then, in 2007, he transferred to the Criminal Investigations Division where he was a detective in the Financial Crimes Unit and later, the Special Victims Unit. In 2013, he returned to Patrol and in 2016, he was transferred to the Property Management Section. Robert met his lovely wife Elaine, in the late 2000’s and married her in a picturesque, country church in her native Ireland in August of 2012. In March of 2017, the couple welcomed their adorable daughter, Olivia Rose into the world. Being a devoted husband and father was always first priority to him. In his spare time, Robert enjoyed reading books about military history. Additionally, Robert liked to keep in shape through weight training and swimming. In his capacity as a police officer, Robert was known for his positive attitude and his dedication to duty each and every day he reported to work. Many of his co-workers described him as hard working, respected, and a very caring person. His colleagues would say that he had a great sense of humor and could make anyone smile. “We are deeply saddened and our hearts are heavy,” said Sheriff Troy Berry. “Rob battled this virus for weeks and it was heartbreaking to see his condition diminish as he fought so hard to survive. Rest in Peace, faithful servant.” Robert will be deeply missed by his friends, family and all who knew him. There will be a Celebration of Life for Rob in 2021. Additional details relating to this event will be released when plans have been finalized. In lieu of flowers, memorial contributions, in Rob’s name may be made to Johns Hopkins Research on COVID-19 at https://www.hopkinsmedicine.org/coronavirus/giving.html.

Send flowers to the Cadrette family.