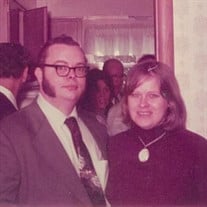 Robert Lloyd Barnett, age 73, of Waldorf, Maryland, passed away at home on January 16, 2021. Robert was born on January 22, 1947 in Washington, D.C. to the late Arnold William Barnett, Sr. and the late Lillian Bowling (Middleton) Barnett. Robert was of the Catholic faith and a longtime parishioner at St. Mary’s Catholic Church in Bryantown, Maryland. He was a Retired Salesman with Hughes Supply (formerly Waldorf Supply) and a Grand Mason at the St. Columba Masonic Temple, Lodge #150, from 1990 – 2003. Robert loved his firearms and talking to people about them. He also enjoyed spending time with his few cats and cockatiels. In addition to his parents, Robert was preceded in death by his brother, Arnold William “Billy” Barnett, Jr. He is survived by his loving wife, Theresa Anne (Middleton) Barnett; daughters, Mary Anne Barnett and Bonnie Marie Barnett; sister, Beverly A. (Barnett) Middleton and her husband, Gabriel; brother, Christopher B. Barnett, Sr.; and grandchildren, Barry R. Ewell, Jr., Abigail Ewell, and Noah Ewell. Funeral Services and Interment will be private. A Memorial Service in Robert’s memory will be held at a later date.

The family of Robert Lloyd Barnett created this Life Tributes page to make it easy to share your memories.

Send flowers to the Barnett family.