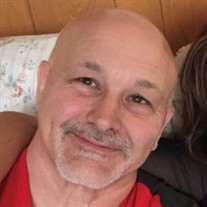 On July 9th, 2021, the world lost an amazing Soul. Richard Anthony “Rick” Rosetta, 56, of La Plata, MD died at MedStar Georgetown University Hospital. Rick was born on August 7, 1964 in Washington DC, to the late Lawrence Charles Rosetta and Beth Gicker. Rick was the owner/operator of All Systems for the past 20+ years. He also had a love of all genres of music, which led to him create a DJ service, “Quick Silver”. His DJ’ing was quite the show including lights, music, and even a disco ball! He also had a love of traveling, cars, and was an avid motorcycle rider. If Rick set his mind to something, there was no effort he would spare to figure out how to accomplish his goal or task. He was a very loyal man and helped anyone he could, friend or foe. Rick was very social, enjoyed cooking for others and making sure everyone ate. Rick loved his family, children and fur babies, always putting his loved ones above everything else. In addition to his wife, Flora, he is survived by sons; Anthony Joseph “AJ” Rosetta (Ashley), and Sean Radchenko, daughter, Simona Radchenko, his mother Beth Furman, his “Pop” Hugh Furman, brother, Michael Rosetta (Angie), sister, Grace Danielle Meek (Ray) --and, of course, his fur babies; Zeus, Apollo, Muddie and Mia, as well as many extended family members. A memorial gathering will be held on Friday, July 23, 2021 from 3:00 – 6:00 PM at Raymond Funeral Service, P.A., 5635 Washington Avenue, La Plata, MD 20646.

The family of Richard Anthony "Rick" Rosetta created this Life Tributes page to make it easy to share your memories.

Send flowers to the Rosetta family.