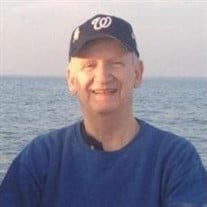 Richard “Ricky” Hayden Fowler, Sr. of Colonial Beach, Virginia passed away December 21, 2020 at Mary Washington Hospital in Fredericksburg, Virginia. Ricky was born in Washington, DC on August 3, 1942 to the late Helen E. and George W. Fowler. He spent his childhood in Washington, DC and was a graduate of Archbishop Carroll High School. He enjoyed staying in Southern Maryland where his parents retired and lived for many years in Northern Neck, Virginia. In addition to his parents, Ricky is preceded in death by his siblings, George “Bitsy” Fowler, Celeste Downs, and Virginia Hughes. Ricky is survived by his children, Richard H. Fowler, Jr. and his wife Kristen, of Fairfax, Virginia and Michael B. Fowler of Tappahannock, Virginia; four grandchildren and two great-grandchildren; his siblings, Zoe Ann Vest of Port Royal, Virginia, Anthony Fowler of Scottsville, Virginia, Mary Russell of Valley Lee, Maryland, and Jamie Fowler of Avenue, Maryland. Ricky is also survived by many nieces, nephews, and cousins. Ricky worked in his career in telecommunications for many years until his retirement from AT&T and Sprint. He loved being outdoors, hunting, fishing, camping, and spending time on his boat. He was a history buff and an avid reader. Ricky was proud to be a longtime member of AA. He had a welcoming personality and a great sense of humor. Ricky was loved by his many family and friends and his memory will forever remain in our hearts. Services for Ricky will be held at a later date.

The family of Richard "Ricky" Hayden Fowler created this Life Tributes page to make it easy to share your memories.

Send flowers to the Fowler family.