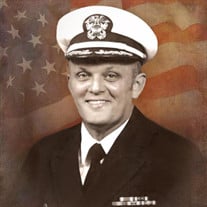 Captain Richard Arthur Anawalt Richard Arthur Anawalt passed away at his home in White Plains, MD on August 10, 2021 at the age of 80. He was born in Cedar Rapids, Iowa January 21, 1941 to Walter Charles and Della Adcock Anawalt. Richard grew up in Cedar Rapids and then attended Miami University of Ohio where he earned a Bachelor’s degree and his commission into the US Navy in 1963. He served in two tours in Vietnam on the US Stoddard and then earned his Master’s degree in Meteorology from the Naval Postgraduate School in Monterey, California. He continued graduate studies in Meteorology at the Massachusetts Institute of Technology in Cambridge, Massachusetts. Captain Anawalt served as a programming officer before becoming an Instructor of Meteorology at the U.S. Naval Academy and later became the Chairman of the Oceanography Department. He then went to Norfolk, Virginia, where he served as the Executive Officer. In 1983, he returned to Washington D.C., as the head of the Policy, Plans, and Readiness Branch on the Staff of the Oceanographer of the Navy. When the Oceanographer’s office reorganized, Captain Anawalt was reassigned as the Director of the Resource Division where we served until September 1986 when he assumed the duties of Superintendent, U.S. Naval Observatory until his retirement in 1989. Captain Anawalt earned the Meritorious Service Medal, Naval Commendation Medal (two Gold Stars), Republic of Vietnam Service and Campaign Medals, and the National Defense medal. In retirement Richard enjoyed cheering for the Washington Football team, watching golf, and running the family football competition. He also enjoyed hearing about the accomplishments and exploits of his children and grandchildren. He will be greatly missed. Richard leaves behind his beloved wife of 44 years, Madeline, sons Bradley Anawalt (Deborah), Steven Anawalt, Andrew Anawalt (Elise), Andrew Garcia (Marta), eight grandchildren, and two great-grandchildren. Visitation will be held at Raymond Funeral Service Chapel, 5635 Washington Avenue, La Plata, MD on Tuesday, August 24 from 2:00-4:00 and 6:00-8:00. A graveside service will be held on Wednesday, August 25 at 11:00 at Cedar Hill Cemetery, 4111 Pennsylvania Ave, Hillcrest Heights, MD. Memorial contributions may be made in Richard’s name to the American Cancer Society.

The family of Richard Arthur Anawalt created this Life Tributes page to make it easy to share your memories.

Send flowers to the Anawalt family.