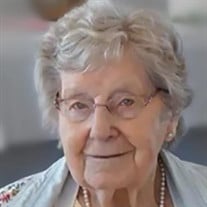 Peggy Barbara St. Clair, 97, of Charlotte Hall, MD, passed away on Saturday, January 16, 2021. She was born on October 16, 1923 in London, England to the late Bessie and James Rollings. Peggy was predeceased by her beloved husband, Charles Raymond “Ray” St. Clair; her daughter, Susan Marie Straus; her granddaughter, Cassie Beth St. Clair; and her sister, Stella Rollings. Peggy was a WWII bride. She met Ray while stationed near London with the 101st Airborne, shortly after D-Day, 1944.They were married on October 11, 1945, in London. Peggy arrived in America in April 1946 on the Vulcania. Peggy transitioned to the wife of a tobacco farmer, where she supported Ray, raising poultry, processed pork, and working in the fields and gardens. In 1972 she started as a Teacher’s Aide at Glasva Elementary School. In 1977, she received her Bachelor of Arts degree in Early Education at Notre Dame of Maryland University and ended her teaching career in 1989 at Dr. Higdon Elementary as a Pre-K Teacher. She enjoyed making her crafts, knitting, crocheting, bird watching, and hot tea. She is survived by her sons, Keith St. Clair, Glenn St. Clair (Mary), and Brian St. Clair (Patty); daughter, Donna Fuqua (Ty); her ten grandchildren, Jennifer, Keith Jr., Jeremy, Tonya, Olin, Linden, Meaghan, Christopher, Taylor, and Robert; and her 11 great-grandchildren, Jenna Marie, Jordon, Julian, Brooklyn, Jeremy Jr., Penelope, Harper, Emerson, Reagan, Cameron, and Lucas. A Visitation will be held on Wednesday, January 27, 2021 from 10:00AM until time of Mass at 11:00AM at St. Mary’s Catholic Church - Newport (11555 St. Mary’s Church Road, Charlotte Hall, Maryland, 20622). Interment to follow in the church cemetery. In lieu of flowers, the family requests donations be made in Peggy’s memory to the Pancreatic Cancer Action Network at www.pancan.org. Social Distancing and masks are required at all times.

Peggy Barbara St. Clair, 97, of Charlotte Hall, MD, passed away on Saturday, January 16, 2021. She was born on October 16, 1923 in London, England to the late Bessie and James Rollings. Peggy was predeceased by her beloved husband, Charles... View Obituary & Service Information

The family of Peggy Barbara St. Clair created this Life Tributes page to make it easy to share your memories.