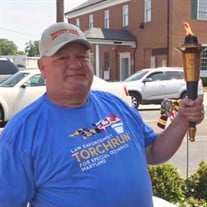 Patrick J. Reilly, Sr. of Bel Alton, MD passed away February 9, 2021 shortly after noon surrounded by his family. He was born December 20, 1955, son of Louisa and Thomas Reilly of Washington, DC. He was preceded in death by his mother, Louisa, father, Thomas, and siblings Charlie, Joseph, and Marilou. He is survived by his loving wife of 43 years, Sharon. He cherished his role as father to Patrick (Tass), Charlie (Julie), and Chelsea (Ryan); And as PopPop to Annabella, Sophia, Cameron, Noelle, Lucy, Gabriel, Emma, Ryan, David; and brother to 8 surviving siblings Elizabeth, Thomas, Celesta, Eugene, Christina, John, Anthony, and Bernard; and uncle to 12 nieces and nephews. To Pat, family was everything. Patrick grew up in Washington DC, later moving to Prince George’s County where he graduated from Douglas High School (1974). He met the love of his life, Sharon in 1976. They were married in April of 1978. Pat had always dreamed of being a Law Enforcement Officer. In 1978, he was offered a position as an officer with the Bladensburg Police Department. After a few years he and his wife moved to Charles County, MD, where Pat served as a Deputy with the Charles County Sheriff’s Office (CCSO) for 17 years. During his career with the CCSO, Pat spent time as an Undercover Narcotics Officer, the first coordinator of Charles County Crime Solvers, a D.A.R.E instructor in the schools, active member and past President of the local FOP and so much more. Towards the end of his career, he spear-headed the Community Policing Initiative in Waldorf, MD. His service to the community was endless. He retired in 1998. After retiring from Law Enforcement, he went to work as a General Manager with Brandywine Auto Parts. You may also know him as “Recycle Man” from the Brandywine Auto Parts commercials. After retiring from Brandywine, he launched into a new venture with the “Deputy Dogs” hot dog cart, which for the past 15 years has served the community through public events, as well as “Hotdog Tuesday” at Martin’s Service Station in La Plata, MD every Tuesday between May-October. Pat never met a stranger. He made everyone feel like they had been longtime friends. If you had a friend in Pat, you had a friend for life. He had an infectious laugh and was always quick with a joke. He was fiercely loyal, full of love for all, and truly had a servant’s heart. He was a part of countless civic organizations including The Lion’s Club, Crime Solvers, Boy Scouts of America, The Just Say No Club, and Southern Maryland Wood Carvers. A visitation will be held on Wednesday, February 17, 2021 from 9AM until time of service at 12Noon at the Charles County Fairgrounds Showring, 8440 Fairgrounds Road, La Plata, Maryland 20646. Due to COVID19 regulations, masks are required (the family will provide N95 masks and everyone will be required to wear the provided masks) and social distancing is still in place. The Fairgrounds has asked us to inform family, visitors, and friends that once seating capacity at the Showring has been reached, everyone else will be asked to exit the Showring. Join us in celebrating and honoring Pat's life on this live stream from the service - https://youtu.be/sLxCplykX7o. Interment to follow at Wesleyan Memorial Gardens, 9690 Shepherds Creek Place, La Plata, Maryland 20646. In lieu of flowers, memorial contributions may be made in Pat’s name to Special Olympics of Charles County, 8190 Port Tobacco Road, Port Tobacco, MD 20677; Children’s Hospital of DC, 111 Michigan Avenue, NW, Washington, DC 20010; St. Jude Children’s Research Hospital, (Memorial and Honor Program), 501 St. Jude Place, Memphis, TN 38105-1942; and Lewy Body Dementia Association 912 Killian Hill Road SW, Lilburn, GA 30047.

Patrick J. Reilly, Sr. of Bel Alton, MD passed away February 9, 2021 shortly after noon surrounded by his family. He was born December 20, 1955, son of Louisa and Thomas Reilly of Washington, DC. He was preceded in death by his mother, Louisa,... View Obituary & Service Information

The family of Patrick J. Reilly created this Life Tributes page to make it easy to share your memories.

Send flowers to the Reilly family.