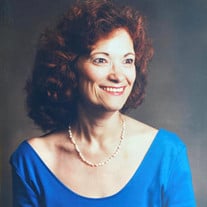 Patricia “Pat” Camille Kelly McConkey, 79 of Waldorf, Maryland, passed away unexpectedly on July 29, 2020. Pat was born in Washington, DC and was the daughter of Joseph Kelly and Elsie Hill. In addition to her parents, she was predeceased by her brother, Joseph Kelly. She grew up in Washington, DC and graduated from Suitland High School. In 1958, she married Henry McCrea. Pat worked for the Bell Telephone System, now Verizon, for 25 years and retired in 1993. Pat McConkey was a woman who was full of fire and her spirit always shone brightly. Pat possessed a love of the Fine Arts throughout her entire life but she especially enjoyed performing in musical theater and choral groups. She actively participated in many groups throughout Southern Maryland. Shortly after arriving in Charles County in 1976, Pat joined the a cappella female barbershop harmony group, The Sweet Adelines. She was very proud to be part of an international organization dedicated to preserving the unique sound of this music genre. In 1981, Pat, along with her son Michael Santana, joined the Port Tobacco Players (PTP) theater group with her first show being “A Christmas Carol.” Pat was nominated for The Washington Area Theatre Community Honors (WATCH) award in 2002 for Outstanding Cameo in a Play, for her role as “Gay Wellington” in You Can’t Take It With You. During her tenure with PTP, Pat also performed in several productions at the Black Box Theater in Indian Head, Maryland and from 1980 through the early 2000’s Pat participated in the community theater group at the College of Southern Maryland (CSM). There she worked regularly with CSM staff members, Emmitt Woodey and Keith Hight largely in musical theater productions. In addition, Pat performed with the Tantallon Community Players in Fort Washington appearing in several shows between 1980 and the early 2000’s. From Fall 2003 through Spring 2017, Pat was a soprano in the Chesapeake Choral Arts Society (CCAS) and she performed many great works such as Rutter’s “The Magnificat”, Handel’s “Messiah”, and both the Rutter and Brahms “Requiem.” Pat particularly enjoyed the “Pops” Concerts presented by the choir where she could allow her spirit to show with solo performances such as “Kids” from Bye, Bye, Birdie, “The Firefly” from Ogden Nash’s The Zoological Gardens, and “The Thing-Ummy Bob (That’s Going to Win the War)” by Gordon Thompson and David Heneker. A special highlight of Pat’s singing career was performing in Vienna, Austria and in Prague, Czech Republic as part of a vocal tour with Pilgrim Church, United Church of Christ and some members of CCAS. Pat was also active in many Summer Vocal Workshops in the 80’s and 90’s, hosted at the Port Tobacco Players Theater. In the early 2000’s, Pat participated in the Senior Idol Competition and she was one of the original members of PTP’s Encore Adults group, a local traveling troupe sponsored by PTP. Working to continue the spread of viewership for the Arts, Pat participated in the Center Stars touring show from the Richard R. Clarke Senior Center in her later years. She also sang with the Silver Tones and played Hand Bells for the group. Certainly, Pat McConkey will be sorely missed by the Performing Arts world of Southern Maryland. Pat is survived by her children, John Gregory McCrea (Roberta) and Michael Kelly Santana (Sherry), as well as her granddaughter, Robin Jones Tatum (Eddie). A Visitation will be on Wednesday, November 18, 2020 from 2:00PM until time of Memorial Service at 3:30PM at Raymond Funeral Service Chapel, 5635 Washington Avenue, La Plata, Maryland 20646. In lieu of flowers, the family requests that you honor Pat’s love of animals with a donation to The Humane Society of Charles County or Alley Cat Allies.

Patricia &#8220;Pat&#8221; Camille Kelly McConkey, 79 of Waldorf, Maryland, passed away unexpectedly on July 29, 2020. Pat was born in Washington, DC and was the daughter of Joseph Kelly and Elsie Hill. In addition to her parents, she was... View Obituary & Service Information

The family of Patricia "Pat" Camille Kelly McConkey created this Life Tributes page to make it easy to share your memories.

Send flowers to the McConkey family.