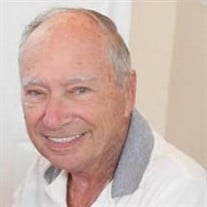 Noah Lee Weinberger January 6, 1937 - December 16, 2020 Lee Weinberger was born in Philadelphia on January 6, 1937 and passed away at his home on December 16, 2020. Lee is survived by his wife of 61 years, Madelene, his three sons, Ron, Jim, and Michael and his grandchildren, Melissa, Royce, Jonah, and Brett. A highly decorated veteran of 28 years of the United State Air Force, progressed to Master Sergeant and switched to the Officer Corp and retired as a Captain. Lee served 3 overseas tours of duty, France, Germany, and Vietnam. Among many of his recognitions while in the service, he received the Bronze Star Medal, Vietnam Service Medal with four Bronze Service Stars, Republic of Vietnam Campaign Medal, Republic of Vietnam Gallantry Cross with Palm, and the Army Good Conduct Medal with two loops. In his civilian life, he was a Vice President of Human Resources of a government defense contractor and was a founding member of Sha’are Shalom Synagogue in Southern Maryland. More than a hobby, Lee was often behind the scenes on family trips documenting the travels with his photography. His works have graced not only his home, they have been in seen in local community events and the newspaper. Lee had a great joy of life with travel, wines, Jack Daniels, dark chocolate, and politics among his passions. The family is having a private visitation and small service on December 21, 2020 with a more formal burial to be planned at Arlington National Cemetery. In lieu of flowers, a donation can be made to Congregation Sha’are Shalom at 18 Henry Ford Circle, Waldorf, MD 20602.

The family of Noah "Lee" Leon Weinberger created this Life Tributes page to make it easy to share your memories.

Send flowers to the Weinberger family.