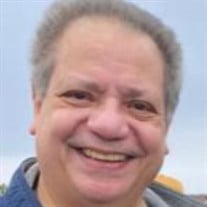 Miguel "Mike" A. Medina, Jr. of Waldorf, Maryland, passed away unexpectedly on May 26, 2021. He was born in Brooklyn, New York to the late Miguel A. Medina, Sr. and Clara E. Medina. He was 61 years old. Early in his life, Mike had a passion for aircraft. He graduated from Aviation High School in Long Island City, New York with his F.A.A. approved certificate to test Airframe and his Powerplant License. Mike joined the United States Air Force right after high school as an Aircraft Maintenance Specialist and was stationed at Eglin Air Force Base in Northwest Florida. During his time in the U.S.A.F., he married his late wife Deborah Medina and in that union they had two children. He had an honorable discharge from the service and went on to work as a Lead Mechanic at Miracle Strip Aviation in Destin, Florida then onto Glasco/Learjet on Eglin A.F.B. and on Howard A.F.B. in Panama Canal Zone as a site supervisor. Mike loved spending time outdoors with his family and friends. Some would say Mike was a father figure to many. He loved traveling, camping and exploring historical sites with his family. Mike and his late wife were also volunteer scout leaders with both the Boy Scouts of America and the Girl Scouts in NWFL and in the Panama Canal Zone. Once Mike’s contract had ended in the Panama Canal Zone, Mike was offered to move him and his family back to the state side and work for Raytheon Aerospace C-21A at Andrews A.F.B. in Southern Maryland as the Senior Service Technician and worked there until getting his last career move with United Airlines in April 1997 and continued to work until his unexpected passing. Mike was a great troubleshooter and knew his aircrafts. He was very respected with all his colleagues throughout his career as an Aircraft Technician. His memories will be honored by his wife, Jennifer Donnell-Medina; brother, Jose Medina; son, Brian Medina; daughter, Stacy Medina; grandsons, Ryan Medina and Stone Medina; and a host of other relatives and friends.

Miguel "Mike" A. Medina, Jr. of Waldorf, Maryland, passed away unexpectedly on May 26, 2021. He was born in Brooklyn, New York to the late Miguel A. Medina, Sr. and Clara E. Medina. He was 61 years old. Early in his life, Mike had a passion... View Obituary & Service Information

The family of Miguel "Mike" A. Medina Jr. created this Life Tributes page to make it easy to share your memories.

Miguel &quot;Mike&quot; A. Medina, Jr. of Waldorf, Maryland, passed away...

Send flowers to the Medina family.