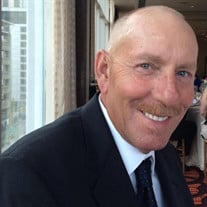 Michael “Mike” Eugene Havenner, 67 of White Plains, Maryland, passed away on Monday, August 2, 2021, surrounded by his loving family and friends, in the comfort of his home. Michael was born on April 3, 1954 in Washington, DC. He was the son of the late Louis Carter Havenner and Lillian Mae Scott. In addition to his parents, he was also preceded in death by his sister, Patricia “Pat” Latham. Mike leaves to cherish his memory his wife, the “Love of his Life,” Deanna Havenner; his children, Aaron Havenner (Bonnie), Nicholas Somers (Jim), and Christy Mitchell (Brian); his sisters, Shirley Taylor, Janice Ferrara (Joe), and Cathy Downing (John); and three grandchildren, Jarrod, Hunter and Mackenzie. Mike also leaves his ever-present and adoring dog Ali, who never left his side. Mike grew up in Fort Washington, Maryland, graduating from Friendly High School. He proudly served his country as a Medic in the United States Army and earned numerous badges. Mike was a homebuilder in Southern Maryland for over 40 years, later branching out into the commercial construction industry as a Superintendent with Rand* Construction Corporation in the Washington, DC Metro area. He was most proud of his role in building the new Calvert Marine Museum Stage where many continue to enjoy outdoor concerts and events. Mike had a love for music and enjoyed playing his guitar and often sang to his wife, Deanna. Mike could make you LAUGH a little louder, SMILE a little bigger, and LIVE just a little bit better. Mike was loved by all who met him and will be greatly missed. Visitation on Thursday, August 12, 2021 from 12PM-2PM with Prayer Service at 1:30PM at Raymond Funeral Service Chapel, 5635 Washington Avenue, La Plata, Maryland 20646. Memorial contributions in Mike’s name may be made to Hospice of Charles County, 2505 Davis Road, Waldorf, Maryland 20603.

The family of Michael "Mike" Eugene Havenner created this Life Tributes page to make it easy to share your memories.

Send flowers to the Havenner family.