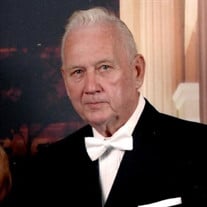 Michael Floyd McGuigan Sr. On March 31, 2021 Michael “Mike” McGuigan passed from this world in the peace and comfort of his Charlotte Hall home, his last days being spent surrounded by his family and friends. Mike was born in 1940 to Michael “Floyd” McGuigan and Clara Jameson McGuigan of Waldorf where he lived for the vast majority of his life. He attended La Plata High School and was a member of the very first La Plata High School football team playing the position of tackle. His unique sense of humor earned him the title of class clown and his gift of making people laugh, especially at moments when it was needed the most, would remain with him for the rest of his life. After graduation, Mike enlisted in the United States Air Force and spent the next four years deployed in Okinawa, Japan. Upon his honorable discharge from the military Mike returned home. He was hired by the Metropolitan Police Department, Washington D.C. beginning his career as a police officer which spanned the next 27 years. Often described as a “Cop’s Cop”, Mike’s assignments included uniformed street patrol, Civil Disturbance Unit and supervisor. Respectfully referred to by his coworkers as “Pops”, Mike’s career and stories of police work sparked the interest of both of his sons who later followed in his footsteps with careers in law enforcement of their own. His retirement from the MPD in 1990 was short lived as he returned to a similar line of work taking a position employed by the Mellon family. As a member of their private security force, Mike provided protection for their various assets and firearms training for the other members of the security team over the next 22 years. After 49 years in law enforcement and protective service, Mike decided to retire once and for all to enjoy his days doing what he preferred most, spending time at home with his family and ensuring he tried to catch every crab in the river possible. Although he gave away almost every one he caught to his family and neighbors, this was one of his peaceful enjoyments. His personal reward was the thanks from the person receiving a free dozen jumbo crabs, already cooked and seasoned. Known by many nicknames such as “Pops”, “Big Mike”, and his favorite, which was quickly taught to each grandchild, “Feather Merchant”, Mike was blessed to have his family living close to his home and no more than an few hours away, ensuring every holiday and special occasion would be well attended and filled with gag gifts, bad jokes and creative songs/poems which were humorous, but often inappropriate for some audiences. Mike can be best described as a man who would always look out for his neighbors, friends and most importantly…his family. No matter what the problem, Mike was the strong, caring person who everyone could depend on to be there to help in whatever way possible. His love, guidance and family strength will be missed, yet treasured in the memories of his loved ones. Mike is survived by Joyce, his beloved wife of 56 years, his children Linda Greenawalt (Ivan), Michael McGuigan Jr. (Susan), John McGuigan (Caren) his grandchildren Perry Greenawalt (Lauren), Jessica Kramer (Joey), Alana, Kristen, Michael and Mikayla McGuigan and great-grandchildren William and Ava Greenawalt. Arrangements will be provided by Raymond’s Funeral Home, La Plata, MD. A viewing at Raymond’s Funeral Home will take place on April 9, 2021 from 0930-1100, service from 1100-1130 immediately followed by burial at Trinity Memorial Gardens, Waldorf, MD.

Michael Floyd McGuigan Sr. On March 31, 2021 Michael &#8220;Mike&#8221; McGuigan passed from this world in the peace and comfort of his Charlotte Hall home, his last days being spent surrounded by his family and friends. Mike was born in... View Obituary & Service Information

The family of Michael Floyd McGuigan Sr. created this Life Tributes page to make it easy to share your memories.

Send flowers to the McGuigan family.