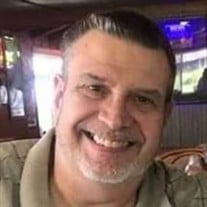 Michael Paul Hare, age 66 of Clinton, Maryland, died January 27, 2021 at Southern Maryland Hospital in Clinton, Maryland. Michael was the owner of Green Mountain Florist. He got his start as a young man at Sharper's Florist before starting his own business. He also spent the last 16 years of his floral career at Sharper's Florist, before retiring. Michael was the most talented person you could ever meet. From his floral designs to cake decorating, creating incredible elaborate cakes with all the accoutrements to go with them. Wonderful picturesque gardens in the yard. He painted beautiful watercolors treasured by his family. He also made beautiful and unique jewelry. Michael was a wonderful husband and the best step-parent and grandparent anyone could ever ask for. He was very loving to his step family and always made them/us feel like his own in every situation, holiday, birthday or whatever occasion there was. Some of Michael’s accomplishments were WORLD CUP FLORAL DESIGN COMPETITION in Greece (#1 in the world), President of Mid-Atlantic Florist Association, President of DC-Maryland-Virginia Teleflora Unit, Teleflora Education Specialist, designed for numerous Washington Allied Florist Shows, designed for DC-Maryland-Virginia Teleflora Bridal Shows – he won too many design competitions and was always #1. Michael was always happy to have family gatherings and show off is talents in doing so. His warm love and happy hugs and big smiles will be missed so much. He was the son of Paul Sullivan Hare and Hazel Marie Blackwell Hare. In addition to his parents, he was predeceased by his wife, Patricia Jean (Davidson) Hare; his brother, Douglas Wayne Hare; and his step-daughter, Deborah Susan Demarr. He is survived by his brother, Gary Lamar Hare (Shirley Warring Hare); his nephews, Ronald Wayne Hare (Kimberly Bays Hare) and Craig Steven Hare; his great nephews and nieces, Thomas Lamar Hare, Trevor Zane Hare, Allison Nichole Hare, and Taylor Hare Carter; his step-children, Barbara Jean Polikoff, Nancy Alice Taylor, and Charles Aurther Smith; and his step-grandchildren, Sandy, Christina, Charles Jr., Brieanna, and Dallas. He is also survived by six step-great-grandchildren. Graveside burial service will be at 12PM on Wednesday, February 17, 2021 at Trinity Memorial Gardens, 3221 Mattawoman-Beantown Road, Waldorf, Maryland 20601. Face masks are required for all services and social distancing is to be observed with limited attendance.

Michael Paul Hare, age 66 of Clinton, Maryland, died January 27, 2021 at Southern Maryland Hospital in Clinton, Maryland. Michael was the owner of Green Mountain Florist. He got his start as a young man at Sharper's Florist before starting... View Obituary & Service Information

The family of Michael Paul Hare created this Life Tributes page to make it easy to share your memories.

Send flowers to the Hare family.