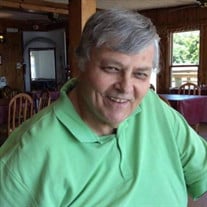 Maurice “Bo” Boucher, 78, of White Plains, MD died September 27. Bo retired in 2011 from the National Rural Electric Cooperative Association (NCREA) in Arlington, VA as Prescription Benefit Administrator, after more than 45 years in the pharmaceutic industry. Bo was an 8-year USAF veteran serving as a pharmacy technician during the Vietnam War era. He was stationed at bases in CA, MS and AL and later in Izmir, Turkey for 18 months, of which he would recant some of his great experiences. Upon returning from overseas, Bo completed his last 4 years at Andrews AFB as a pharmacy technician achieving the rank of Staff Sargent. Upon his discharge he went back to college, attending both Prince Georges Community College and Pharmacy School, Univ. of MD at Baltimore. Bo was born on August 18, 1943 in North Dighton, a tiny New England town in southeast MA, to the late Maurice A. Boucher and Idola (Lola) Boucher. He is also preceded in death by his step-mother, Elizabeth “Betty” Boucher and brother-in-law, Frank Wellman, all from MA. He is survived by his loving wife of 54 years, Jean G. Boucher, of White Plains; son Scott Boucher of White Plains; daughter Lisa Boucher Terry and her husband Jack of Columbia, MD; grandsons, Austin and Noah Terry; granddaughter, Anna Terry; sister Diane G. Wellman of Osterville, MA and brother William “Billy” Boucher of Cape Coral, FL and is survived by numerous cousins, nieces and nephews. Bo had a spontaneous personality and a wonderful sense of humor. He enjoyed sending jokes via email to his many friends and relatives and was an avid sports enthusiast. He could be found most days watching his favorite local teams - Redskins, Wizards, Nationals, Capitals and Terps. Bo loved his Charles County community and became active in the Greater Waldorf Jaycees in the late 70s. He held several positions with the local community service organization, including State Director, VP and Chapter President and as District Director of the Maryland Jaycees. For many years, Bo could be found every Thursday night working the Jaycee Bingo or one weekend a month spinning the roulette wheel at monthly Casino nights, both fundraisers where proceeds went back to the community in a number of ways. He was a Maryland Jaycee Lifetime Member, the highest award given to a Maryland Jaycee for his or her outstanding contributions to the Jaycee Organization throughout the state. When his children were young, he was very active at Peace Lutheran Church in Waldorf, MD and served as the treasurer. Bo later became engaged with Charles County Habitat for Humanity, where he held Executive Board positions as Secretary and Treasurer for many years. He participated in the construction of 6 new Habitat Homes during his tenure to provide a hand-up to qualified low-income families in need of safe and affordable housing. Bo was strongly in support of our veteran groups, such as the Wounded Veterans, Paralyzed Veterans and the USO and a regular donor. He was a member of American Legion Post #82 locally. Bo adored his wife, Jeannie, and her cooking. He was so grateful of the great care she provided to him when his health problems limited his abilities. He enjoyed spending time with his family and cherished fishing with his son and grandsons. He liked playing games and cards with his granddaughter and talking politics and current events with his daughter. He taught both of his grandsons chess and when they began beating him, it didn’t sit well with his competitive nature. Bo dedicated most of his life to helping others and enjoying time with friends and family. He truly lived by the Jaycee creed – "Service to humanity, is the best work of life!" The family will receive visitors on Wednesday, October 13 from 5-6pm, followed by a memorial service at 6pm at Raymond Funeral Service, P.A., 5635 Washington Avenue, La Plata, Maryland 20646. In lieu of flowers, donations may be made to Patuxent Habitat of Humanity, American Diabetes Association, Greater Waldorf Jaycee Foundation or Bryans Road Volunteer Fire Department and Rescue Squad Inc.

The family of Maurice "Bo' Boucher created this Life Tributes page to make it easy to share your memories.

Send flowers to the Boucher family.