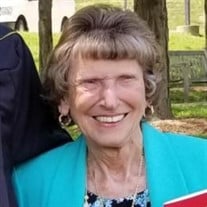 Maureen Jacobs, age 87, of La Plata, MD, died on July 23, 2021 at her home surrounded by family. She was an only child born on September 10, 1933 in Washington, DC to the late Barrett and Mary Nuckols. Maureen was married to Robert A. Jacobs for 68 years and they had four children: Bob, Carol (Don), Bill, and Steve (Jeanne). She had five grandchildren: Dena (Joe), Erica (Jeremy), Kevin (Kristen), Matthew, Michael, and one step-grandchild, Eric (Dawn Marie). Maureen also had nine great-grandchildren: Dominic, Colton, Ryan, Briella, Logan, Gavin, Mason, Ruby, and Declan. She attended Holy Comforter Grade School and Immaculate Conception Academy High School, both in Washington, DC. On Sunday, December 7, 1952, she married Robert, who was in the US Army. They bought their first house in Forestville, MD in 1957. They then moved to District Heights in 1959, where they lived until 1994. While living in District Heights, they were parishioners of Mount Calvary Catholic Church where she was a member of their Sodality. Together with her husband, they served on pre-Cana, post-Cana, and the Bereavement Committee. She has been a member of the Queens of the Knights of Columbus in Forestville since 1985. In 1994, they moved to La Plata and have been active parishioners at Sacred Heart Catholic Church since that time. She has been a member of Sacred Heart Sodality since December 1994. Maureen loved going to church. She went to Mass every morning at Mount Carmel except for Sundays. On Sundays, she would go to Mass at Sacred Heart. She loved praying the Rosary and talking with the Priests. Maureen has been a member of the National Active and Retired Federal Employees Association since December 11, 1995, the Charles County Senior Fitness Center since 2000, the Red Hats since the spring of 2000, and Court Neale’s Catholic Daughters of America since May 16, 2006. Maureen was active in her community as a volunteer at Health Partners in Waldorf from 1995 until 2014. She also volunteered with Mary and Loretta’s Pantry from its inception. Visitation will be held on Monday, August 2, 2021, from 2:00-4:00 pm and 6:00-8:00 pm with a Prayer Service at 7PM at the Raymond Funeral Service Chapel, 5635 Washington Avenue, La Plata, MD 20646. Mass of Christian Burial will be celebrated at Sacred Heart Catholic Church, 201 St. Mary’s Avenue, La Plata, MD 20646, at 10:00 am on Tuesday, August 3, 2021. Interment to follow at Sacred Heart Catholic Church Cemetery. Memorial contributions may be made to Hospice of Charles County, 2505 Davis Road, Waldorf, MD 20603 or Cemetery Improvement Fund, Sacred Heart Catholic Church.

Maureen Jacobs, age 87, of La Plata, MD, died on July 23, 2021 at her home surrounded by family. She was an only child born on September 10, 1933 in Washington, DC to the late Barrett and Mary Nuckols. Maureen was married to Robert A. Jacobs... View Obituary & Service Information

The family of Maureen Jacobs created this Life Tributes page to make it easy to share your memories.

Send flowers to the Jacobs family.