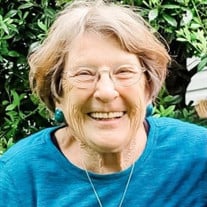 Mary Lou Wills, 90, of Silver Spring, passed away on Tuesday, November 30, after a long illness. She came from humble roots, growing up in a small town in Michigan, called Centreville. Her parents were John (called Jake) and Elenore Marion... View Obituary & Service Information

The family of Mary Lou Wills created this Life Tributes page to make it easy to share your memories.

Mary Lou Wills, 90, of Silver Spring, passed away on Tuesday,...

Send flowers to the Wills family.