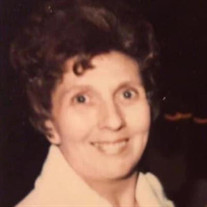 Mary Thompson Parrish of La Plata Maryland, passed away peacefully after a 15 year battle with Alzheimer’s Disease, on November 9, 2020. Mrs. Parrish was born on March 28th,1925 in Baltimore Maryland, to John David Thompson and Maude Jenkins Thompson. She was the sixth of 8 children. On October 24th, 1947, she married the love of her life, WW II veteran and neighbor Robert H. Parrish. They settled in Baltimore, Maryland, raised two children, Jane Richard, and Linda Parrish both of La Plata and retired educators with the Charles County Maryland School System. Their life in Baltimore was interrupted when Robert was re called to active military duty to serve in the Korean War. At wars end he remained on active duty for the next 20 years retiring as a Colonel in the U.S. Army. She was a dedicated military wife, and homemaker who also worked for a time at the Social Security Administration. She is survived by husband, Robert, daughters Jane Richard (Joseph) and Linda Parrish of La Plata, Maryland, Grandsons Christopher R Richard (Kristin) and Major Robert J Richard, US Army (Kristie). Additionally, she is survived by her much loved 5 great grandchildren, Austin, Luke, Alexander, Tyler, and Evangeline Richard. She is also survived by sisters in law Catherine Thompson and Margaret Thompson. She was preceded in death by her seven siblings, Henry Thompson, Ann Delashmutt (Mutt), John Thompson, Robert C. Thompson, William H. Thompson (Anna), Charles Thompson, and Charlotte C. Weisenburg, (Weisy). Services will be private with internment at Arlington National Cemetery at a later date. In lieu of flowers, the family requests donations be made to the Fisher Center for Alzheimer’s Research Foundation.

The family of Mary Margaret Parrish created this Life Tributes page to make it easy to share your memories.

Send flowers to the Parrish family.