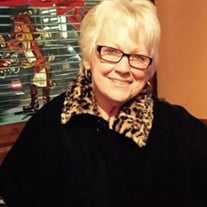 Margaret “Peggy” Frances Henderson, 81, of Mechanicsville, MD passed away on April 29, 2022, at MedStar Southern Maryland Hospital Center, Clinton, MD. Peggy was born on January 30, 1941, in Washington, DC to the late Jack and Betty Morgal. Peggy had an avid love for sports as she grew up, always playing tennis, softball, and volleyball. As she got older, she would become a volleyball referee and then essentially be known as her grandchildren and great-grandchildren’s biggest fan in the stands. Team Grandma was her title that she accepted with pride. She grew up in North Beach and shared many happy memories and stories of her time on the water. She truly loved life to the fullest. Despite all the heartache she endured through the years she never let it stop her from being the life of the party. Her spirit, smile, and slightly mischievous behavior were all infectious. Those baby blue eyes could dazzle just about anyone. Her greatest days and proudest moments were spent with her family, as they gathered for any and every reason to enjoy each other’s company, just as she always wanted. In addition to her parents, she is preceded in death by her husband, Wally Henderson, and her four children, Danielle Cox, Robin Rogers, Timmy Rogers, and Todd Rogers. She is survived by her brother Jack (Joy) Morgal and sister Trudy Morgal; her son-in-law Randy (Kimmie) Cox; her seven grandchildren, Jay (Tami) Cox, Mandi (Danny) Willis, Jamie (Nick) McIntire, Greg Schneider, Lexi (Jarett Hagan) Cox, Anthony Rogers, and Austin Rogers; and her biggest blessings of all, her great-grandchildren, Laila Cox, Caden Cox, Chloe Cox, Chloe Spitzer, Cohen Schneider, Kingston Willis, Luke Willis, and Brees McIntire. Friends will be received on Friday, May 6, 2022, from 12:00 – 2:00 PM at Raymond Funeral Service, 5635 Washington Avenue, La Plata, MD 20646. Interment will be private. In lieu of flowers, memorial donations in Peggy’s name may be sent to the Charles County Humane Society.

The family of Margaret "Peggy" Henderson created this Life Tributes page to make it easy to share your memories.

Send flowers to the Henderson family.