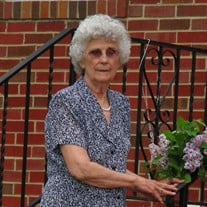 Mabel “Roberta” Taylor, 86, of Leonardtown, MD, formerly of Clinton, MD, passed away on April 8, 2021 in Cobb Island, MD. Born March 21, 1935 in Clinton, MD, she was the daughter of the late Mabel G. and John B. Padgett, Sr. Roberta was the loving wife of the late William Arthur Taylor, Jr., whom she married on July 9, 1955 in Clinton, MD and preceded her in death on October 6, 1990, and the loving mother of the late Joy Samuel. Roberta was born and raised in Clinton, MD, where she graduated from Surrattsville High School. She was the Principal’s Secretary at Surrattsville High School until she retired, at which time she spent her days enjoying time with family and friends. She always said her days were more occupied after she retired then when she worked full-time at the school. Roberta was active with Christ Episcopal Church in Clinton, MD, where she enjoyed preparing for events and helping in the kitchen. Roberta remained in Clinton until she moved to St. Mary’s County in 2007. After moving to St. Mary’s County, she found a new church home with Christ Episcopal Church in Chaptico, where she attended for many years. Roberta also became a member of the Senior Vibes, a group that would sing at nursing homes and events throughout St. Mary’s County. Roberta loved family gatherings, cooking, weekend getaways with her daughter, time with her grandchildren and great-grandchildren, outings with her sister, and just finding ways to serve and love others. She is survived by her granddaughter, Hope Breckenridge (Brian); grandson, Richard Griffiths III; five great-grandchildren; and one great-great-grandchild, and another on the way. In addition to her parents and loving husband, Roberta was preceded in death by her daughter, Joy Samuel; and siblings, Inez Lusby, Gladys “Bea” Farrell, and John “Jack” Padgett, Jr. Due to the pandemic and funeral home restrictions, only family will be received on Saturday, April 24, 2021 from 10:00am until time of Funeral Service at 11:00am at Raymond Funeral Chapel in La Plata, MD. The service will be livestreamed for friends and long-distance family who are unable to attend.

The family of Mabel Roberta Taylor created this Life Tributes page to make it easy to share your memories.

Send flowers to the Taylor family.