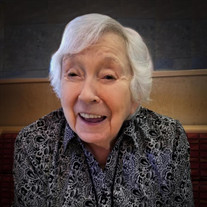 Lorraine Norma Bennett, 84, of Fredericksburg, VA, passed away on September 14, 2020 at Cardinal Village Memory Care. Lorraine was born on August 10, 1936 in Washington DC to the late Carl Williamson and Okla Hossfeldt Williamson. Before retiring Lorraine worked as a Microfilm Supervisor for Andrews Federal Credit Union. She was an avid fan of the soap opera, The Young and the Restless, her husband would record it for her to watch every evening. After retiring she enjoyed RVing full time and traveling to places including Alaska. She enjoyed crafting and making handmade greeting cards. She liked listening to Country music and exercising and was always dressed to impress. In addition to her parents she is proceeded in death by her son, Lance Baker; daughter, Kathie Easter; brother, David Williamson; Sister, Carol Salvas, and her beloved Shih Tzu, Parti. She is survived by her husband of 47 years, Richard W. Bennett; son, Eddie Baker; grandchildren, Adina Keller, Erica Cruikshank, and Chelsea Baker; great-grandchildren, Cole Cruikshank, Jaden Keller, and Avery Keller; son in-law, Billy Easter; step-children, Ricky Bennett, John Bennett, James Bennett, and Jenny Stafford, their spouses and their children and grandchildren. A Celebration of Life will be at a later date.

The family of Lorraine Norma Bennett created this Life Tributes page to make it easy to share your memories.

Send flowers to the Bennett family.