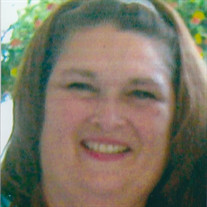 Linda Ann Ciampo was born on March 16, 1963 to John and Eileen Ciampo. They brought her home to join her brother and sister at 14901 Wannas Drive in Accokeek where she lived all of her life. Linda started school at Accokeek Elementary where she met her lifelong companion and friend, David “Moe” Tice. What started out as a game chasing each other around the schoolyard every day turned into a lifelong friendship. Linda was a happy-go-lucky little girl, always smiling and cheerful and ready to make a friend out of everyone she met. She loved exploring and having little adventures, wanting to know how everything worked and being hands-on learning about life. She enjoyed camping with her family and running around the family business, B&G Tavern, where she was known as that cheerful little girl who made friends while trying to stay out of the way of the business. Linda graduated from Gwynn Park Senior High School in 1981. Her first official job after graduation was clerking at Zayres Department Store in Camp Springs, Maryland. She applied for a job driving a school bus with Prince George County School Board Transportation in 1985 where she remained employed the rest of her life. Linda drove special education children most of those years. She thoroughly enjoyed her work and the children she got to know as they rode with her all their school years. Dogs! Rottweilers and Corsos, the bigger the better! Linda would fill up the hours when she wasn’t driving the bus by working with her dogs. She started out with Duchess, a “Rotti” who got her into showing dogs professionally. She met her friends, Jane Williams and John Redford, at the various competitions. They also showed dogs, competing for ribbons and awards in various classes such as obedience and agility. The three of them started meeting outside of the shows and became fast companions for life. They shared in the joys and sorrows of having dogs, their acquiring new bloodlines and breeds, improving traits and markings, illnesses and deaths. Through it all, the closeness continued between Linda, Jane, and John. Another occupation Linda was into was the crab business. Childhood friend, Moe Tice, went into the buying and selling of steamed crabs in the 1980’s and he talked Linda into helping him cook ‘em and sell ‘em. She learned the business inside and out and she could just look into a bushel basket of live crabs and tell you what size and grade they were. She wasn’t afraid to reach in and sort them and she’d haul up bushel baskets of crabs just like a waterman would. Taking advantage of selling the steamed crabs to customers was another way Linda made friends. She got to know the watermen who sold the crabs and where they got them, whether the crabs were procured locally or out of state. Linda was quite the handyman. Her thirst for knowledge and her inquisitiveness caused her to always try to fix it or make it herself first and, only when she was stumped, would she call on her big brother, Tony a/k/a BROBIE, to help her out. She came to him about a lawn mower that stopped working, building a cart for her dogs to pull, fixing the porch roof, fixing her vehicles, helping park and set up her travel trailer, and lots of other things. They formed a special closeness, especially as they got older and their mother passed, and they were the ones who lived closest to each other. Linda was an expert at camping. She could pull the camper anywhere, taking several long-distance trips to Florida with her mother, when they went for holidays to see her sister, Diana. She would talk on her cell phone to Diana almost every day. It seemed they never ran out of things to talk about. Diana was the one who kept after Linda about ways to keep her active and healthy. They would compete with each other as to who made the more nutritious meal. Linda worried about Diana as much as Diana worried about Linda. They went camping together. It was something they both enjoyed doing and both would travel and meet at a designated campground so they could be together. There was another area that both women enjoyed and that was decorating for holidays. Inside, outside, vehicles, camper, everything was decorated. Christmas, Easter, Fourth of July, Halloween, St. Patrick’s Day, Memorial Day, just any excuse and out would come tubs and tubs of decorations. Even if no one was coming to visit, their houses would be over-the-top. It wasn’t unusual to see 15 pumpkins at Halloween or five trees at Christmas. Linda was a good friend. She never forgot a birthday and she loved celebrating any occasion with loved ones. You could always count on a card on any holiday coming from Linda. If you called her to come help, Linda would grab a hat to cover her wild hair and come running. She never let anything get in the way of her being there to give you her support, both physically or emotionally. Linda was preceded in death by her parents, John Ciampo and Eileen V. Ciampo. She is survived by her brother, John Anthony Ciampo a/k/a Tony and his wife, Margaret; her sister, Diana Lynn Reese; her nieces, Tiffany Morris, Jamie Robertson, Angelina Ciampo and Stephanie Black; her nephew, Mark Morris II; great-nephews, Samuel McCraney, Jason Labille Jr., and Dominick Morris; and great nieces, Cecelia McCraney and Serenity Morris. Visitation on Friday, November 13, 2020 from 10AM until Memorial Service at 11AM at Raymond Funeral Service Chapel, 5635 Washington Avenue, La Plata, Maryland 20646. Memorial contributions may be sent to the ASPCA, PO Box 96929, Washington, DC 20090-6929.

Linda Ann Ciampo was born on March 16, 1963 to John and Eileen Ciampo. They brought her home to join her brother and sister at 14901 Wannas Drive in Accokeek where she lived all of her life. Linda started school at Accokeek Elementary where... View Obituary & Service Information

The family of Linda Ann Ciampo created this Life Tributes page to make it easy to share your memories.

Send flowers to the Ciampo family.