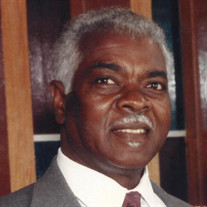 On Saturday October 9, 2021 at 3:35p.m., DR. LESLIE BANCROFT REID went home to be with the LORD. He was preceded in death by his wife, NORMA ALESIA REID. Dr. Reid was born in Clarendon, Jamaica, W.I., on November 7, 1934, to Walter and Brenda Reid. On November 14, 1959, he married Norma A. Reid. They produced two children, Donovan and Diane. Dr. Reid enjoyed travel, drawing, painting, hunting, fishing, photography, reading and watching war and western movies. Leslie Reid worked at the Tia Maria coffee liqueur plant in Kingston, Jamaica. In the early 1960s he left Jamaica for the United States for his college education at Howard University, in Washington, DC. His wife and children followed him to the United States two years later. He graduated with a bachelor’s degree from Howard University and immediately went on to earn a Doctor of Dental Surgery degree also from Howard University. He began to practice dentistry near his home, in Waldorf, Md., in the early 1970s through the late 1990s. During this time he taught dentistry at Howard University as an assistant professor. Dr. Reid also was a member of the Board of Trustees at Charles County Community College, now known as the College of Southern Maryland. He also was instrumental in the founding of the Hospice of Charles County. Dr. Reid was a Christian. He and his family attended worship services at the Temple Hills Church of God, in Temple Hills, Md., from the late 1960s through to the late 1980s. He taught Sunday school lessons throughout his time there. During the late ‘70s until the late ‘90s, the family would pack up their camper and drive to Anderson, Ind., for the yearly Church of God camp meeting. Wonderful memories of friendship and fellowship were made at these summer get-togethers. Other adventures for Leslie included yearly hunting trips to the Midwest with his son and dental colleagues; summer camping adventures to Disney Land, while visiting many national parks along the way, and several trips back to Jamaica, with Norma, for the yearly Jamaica dental convention. Leslie and Norma also enjoyed many cruises and vacations to the Caribbean, Australia, Alaska, Belize and wherever the fishing was good. He and Norma began attending worship services at the Church of the Nazarene in Waldorf, Md., where he also was a Sunday school teacher. Leslie Reid was preceded in death by his parents, Walter and Brenda, his wife, Norma, and his sister, Cynthia Hamilton. He is survived by his children, Donovan and Diane; his brothers and sisters, Rudolph (Dolphy) Reid, Barbara Reid, Greta (Precious) McCleary, Jean (Cherry) Browne and Patrick (Ricky) Reid; and his grandchildren, Elizabeth, Sarah and Samuel. He will be missed by his many friends, colleagues and relatives. In lieu of flowers, memorial donations are asked to LifeStream Church of the Nazarene, 5105 Leonardtown Road, Waldorf, MD 20601. Services for Dr. Reid will be livestreamed on the church's Facebook page. Please check their website, www.lifestreamnaz.org for the link on the day of the service.

On Saturday October 9, 2021 at 3:35p.m., DR. LESLIE BANCROFT REID went home to be with the LORD. He was preceded in death by his wife, NORMA ALESIA REID. Dr. Reid was born in Clarendon, Jamaica, W.I., on November 7, 1934, to Walter and... View Obituary & Service Information

The family of Leslie Bancroft Reid created this Life Tributes page to make it easy to share your memories.

Send flowers to the Reid family.