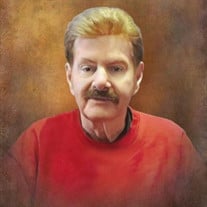 Larry M. Ferris, of La Plata, Maryland died on May 4, 2021 at George Washington University Hospital in Washington, DC. He was 77 years old and a lifelong resident of Charles County. He was an avid Elvis fan and he announced it to the world with license plates saying ELVIS. He enjoyed bingo, slots and hosting meals with family and close friends. He graduated from Archbishop Neale School and the University of Maryland. He taught math at Archbishop Neale School for a number of years. He operated Earl’s Truck Stop in Bel Alton with his father for many years. He owned King El’s Amusements, a vending machine company in La Plata. He called bingo for 30 years in Charles County where he acquired a host of friends who thought of him as family. He was a Board Member of the La Plata Lions Club. He is the son of the late William “Bill” Ferris and Shirley Ferris. In addition to his parents, Larry was preceded in death by his brother, Danny Ferris, and his step-mother, Elaine Ferris. He is survived by his sister, Sara, of Venice, FL, and her daughter, Jocelyn Possehl, her husband Jason, and her sons Tyson, Hunter, Jax and Lucas of Venice, FL whom Larry enjoyed spending time with. Also, her son, TJ Jenkins and his wife, Michelle, of Cape Coral, FL. He is also survived by a niece, Carly Ferris Mayberry and great-nephews Jaiden and Anthony Mayberry of the UK. Visitation on Monday, May 17, 2021 from 4:30PM until time of Funeral Service at 6PM at Raymond Funeral Service Chapel, 5635 Washington Avenue, La Plata, Maryland 20646. Interment will be at a later date. Face masks are required for all services and social distancing is to be observed with limited attendance. In lieu of flowers, please make a memorial gift to Wildlife Rescue, Inc. at Box 330, Monkton, MD 21111.

Larry M. Ferris, of La Plata, Maryland died on May 4, 2021 at George Washington University Hospital in Washington, DC. He was 77 years old and a lifelong resident of Charles County. He was an avid Elvis fan and he announced it to the world... View Obituary & Service Information

The family of Larry Milton Ferris created this Life Tributes page to make it easy to share your memories.

Send flowers to the Ferris family.