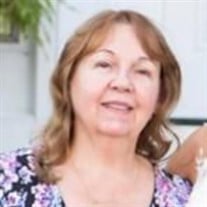 Ms. Judith (Judy) Tomasky, 73 of Waldorf, Maryland unexpectantly began her eternal rest the week of October 3, 2021. Judy was a devout Catholic and a member of Our Lady Help of Christians Church for 42 years. She was a lifelong accomplished artist, pianist, and photographer, and a loving family member. Judy retired in 2017 after working 24 years as a civilian for the U.S. Capital Police in Washington, DC. Among many other duties, she had the opportunity to photograph the U.S. Presidents, Vice Presidents, Dignitaries and Heads of States from around the world, and participate in many other USCP special events such as inaugurations, retirements, and award ceremonies. Judy`s pride was shared by all who were photographed in the years she served in her role. Judy completed her Associates Degree at the College of Sothern Maryland in Charles County. Her lifelong passion for art, music, and photography supported her career working as a piano teacher, photo retoucher, special events photographer, and graphic designer. Time dedicated to her Catholic faith brought her great pleasure, as she committed many hours each week worshipping and walking the Christian path at Our Lady of Christians Catholic Church in Charles County. She cherished time with her family and friends, sharing engaging conversation and memories and helping others. She had an uncanny ability to find happiness in her daily activities. Her artistic personality influenced everyone she met. Judy was wonderfully talented in the arts, she excelled in painting, drawing, sculpting and photography. As an accomplished pianist she shared her love of music, teaching dozens of children to play piano. Often, she would play piano late into the night enjoying her favorite songs such as Beethoven’s Fur Elise. Judy was born in Queens, New York and was predeceased by her parents, John and Dorothy Walz, and her brother Richard Walz. Judy is survived by her sister, Dorothy Davenport Walz and family of East Quogue, New York, as well as Judy’s ex-husband, Raymond Tomasky. Judy is also survived by four children; Thomas Tomasky, Lisa Kizina, Brian Tomasky, and Kevin Tomasky, and nine grandchildren Brendan Latimer, Emily Latimer, and Sarah Latimer, and Allison Tomasky, Carter Tomasky, Victoria Tomasky, Lynzzy Tomasky, Nikko Tomasky, and Julie Tomasky. Judy will be honored in a celebration of life on Thursday, October 14th at Raymond Funeral Home in La Plata, Maryland at 2-4:00 p.m. and 6-8:00 p.m. There will be a viewing and Catholic Mass on Friday, October 15th at Our Lady Help of Christians Church in Waldorf, Maryland at 10:00 and 11:00 a.m. respectfully. The burial service will be Monday, October 18th following the Mass at Trinity Memorial Gardens.

Ms. Judith (Judy) Tomasky, 73 of Waldorf, Maryland unexpectantly began her eternal rest the week of October 3, 2021. Judy was a devout Catholic and a member of Our Lady Help of Christians Church for 42 years. She was a lifelong accomplished... View Obituary & Service Information

The family of Judith Tomasky created this Life Tributes page to make it easy to share your memories.

Send flowers to the Tomasky family.