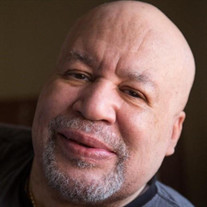 Juan Miller, a longtime resident from the Bronx, New York, passed away at the age of 75 on Thursday, March 4, 2021, while living in La Plata, Maryland. Juan was born on November 9, 1945 to the late William and Norma Miller. Juan graduated from the Maritime High School in New York and trained on the SS John Brown. Upon his graduation, he enlisted in the U.S. Navy, served honorably on the SS Tattnall. While serving in the Armed Forces, Juan developed his love for travel and adventure. Juan spent many years of his life experiencing all that the world had to offer. He enjoyed cruising and vacationing in places like Aruba, the Caribbean, Las Vegas, Thailand, and many other domestic and foreign locations. Upon his discharge from the Navy, he began his 22-year employment with the New York Metropolitan Transit Authority. He started as a conductor, became a motorman, and then later a supervisor. In addition to working for MTA, Juan drove a New York City cab for many years. Juan was always a people person. His time driving a cab allowed him to meet people from different walks of life, including celebrities, politicians and social influencers. As a man of many talents Juan was an amateur photographer, bowler, fisherman, world traveler, lover of Jazz, avid domino, and chess player. Juan was always willing to take on a challenger, using his skills to defeat anyone, or as he would say, “his next victim.” His chess and domino matches allowed Juan an opportunity to teach and impart many words of wisdom to all that would listen. Juan’s infectious smile, and loving spirit, made him the life of the party. Juan leaves to cherish his memory, his wife of 33 years, Gloria West-Miller, beloved son William Miller to carry his legacy, sisters Dolores Leyba & Claire Miller. He also leaves behind many aunts, uncles, nieces, nephews, cousins, extended family, and a wealth of friends. He was pre-deceased by his brother George Miller. Juan will be missed but never forgotten; he will continue to live in our hearts. Information for a memorial service is forthcoming. Please continue to check the site regularly for updates.

Juan Miller, a longtime resident from the Bronx, New York, passed away at the age of 75 on Thursday, March 4, 2021, while living in La Plata, Maryland. Juan was born on November 9, 1945 to the late William and Norma Miller. Juan graduated from... View Obituary & Service Information

The family of Juan Cordle Miller created this Life Tributes page to make it easy to share your memories.