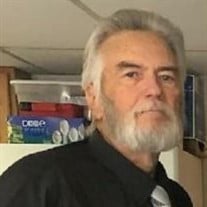 John Walter Ward, Jr. “ Big Jack”, 72, Cobb Island, Maryland Jack was called home to be with the Lord on July 15, 2021. Born January 21, 1949, in Owings Maryland, he was the son of the Late John Walter Ward, Sr. and Alice Irene Gibson Ward. Big Jack as many knew him was a gentle giant working most of his life as an auto mechanic. He was a proud veteran of the United States Air Force. Jack was also a police officer for the Calvert County Sheriff's Department. He was a devoted Christian a member of Cobb Island Baptist Church where he happily served as a Deacon. Jack was a good man, hard working, enjoyed helping others and doing God’s work. He had a love of baseball and was an avid fan of the Baltimore Orioles. He is survived by his wife of 10 years, Ruth Diane Ward, beloved pup Daisy, Sister Joan Dickerson (Michael), Brother in-law Joseph Dundas (Heather), Nephews; Noah “Buzzie”, Keith, Ward, Kingston, Kaleb and Kolton, Niece; Pam and many extended family and friends. In addition to his parents, he is preceded in death by his sister Teresa Ward. A memorial service will be held on Saturday July 24, 2021, at 1:00PM, at Cobb Island Baptist Church, 17608 Cobb Island Road, Cobb Island, Maryland 20625 In lieu of flowers, memorial contributions in his honor to the Cobb island Baptist Church, 17608 Cobb Island Road, Cobb Island, Maryland 20625

The family of John Walter "Big Jack" Ward created this Life Tributes page to make it easy to share your memories.

Send flowers to the Ward family.