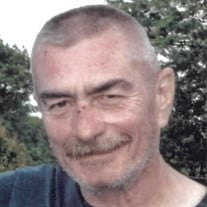 John Alvin Odom, age 71 of Indian Head, Maryland, died on July 31, 2021 at Complete Care (formerly La Plata Genesis) in La Plata, Maryland. He was born on December 2, 1949 in Havre de Grace, Maryland and lived in New Orleans, Louisiana for a short time as well as Port Deposit, Maryland before moving to Indian Head. He called Cecil County home where he lived most of his life – he liked living in the country and small-town life where everyone is friendly. He had a great sense of humor and loved sitting around a campfire sharing amusing stories often about adventures and escapades while growing up at what he affectionately called "The Farmhouse," usually with Gary and Jan at his side enjoying the mischief they always encountered and also entertaining everyone with his witty philosophies of life. When John was going to 1st grade, he didn't want to go – he told his mother that he couldn't possibly go to school "because I don't know how to read or write!" (This was an often-told story with his family.) Through his years as a young man, he would introduce himself very seriously - "my name is John, but they call me Johnny." Many of his friends remember him as "Johnny." He lived a humble life but was always quick to share what he had with someone in need. As a young man, he loved the "muscle cars" and managed to own a couple of them over the years. As a young boy, he was always fascinated with how things worked and was always taking his toys apart to figure out how they worked. He dreamed of becoming an engineer. He attended North East High School. He registered for the draft when he turned 18 and after Basic Training was sent to Vietnam. He served his country with honor in the U.S. Army, 25th Infantry - "Tropic Lightning." He was quite proud of belonging to that group. He did two tours in Vietnam and was awarded a Bronze Star for Heroism in Combat with "V" Device (Oak Leaf Cluster) for Valor as well as a Purple Heart. He was given an Honorable Discharge. He was preceded in death by his father, Cecil Odom and his mother, Susie Davey He leaves to cherish his memory his son, John A. Odom, Jr.; one brother, Gary Odom; two sisters, Jan Alvarez and Sandra Cowan; and two grandchildren, Lilly Odom and Payton Odom. Funeral services will be private.

The family of John Alvin Odom created this Life Tributes page to make it easy to share your memories.

Send flowers to the Odom family.