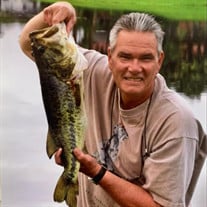 John Bryant Bowman Carroll Born February 29, 1956 Deceased January 26, 2022 John Carroll, loving husband, father, grandfather, brother and uncle passed peacefully surrounded by family on January 26, 2022 at his home in Waldorf, MD; he was 65 years old. John is survived by his loving wife of 40 years, Cindy, his two children, Stephanie Carroll (and her husband Darin Peterson), of Swansboro, North Carolina, and Scott Carroll of Grand Forks, North Dakota. He had three grandchildren Wyatt, Beau and Gage Peterson. He also leaves behind his sister Martha Johnson of Ashburn, VA, and brother George Carroll (and his wife Allison) of Rock Point, MD as well as several beloved sisters-in-law, brothers-in-law, nieces and nephews. John was preceded in death by his father, George C. Carroll, mother Thelma (Bowman) Carroll, and his sister, Beatrice Castrogiovanni. John graduated from High School in 1974. He met his wife Cindy in 1978 and they wed in 1979 in Camp Springs, MD. They raised their two children in Waldorf where they purchased their home in 1989. John retired from the United States Supreme Count as the Cabinetmaker Foreman in 2011 after 32 years of service. John perfected his craft earning the praise of colleagues, clerks, and Justices alike; he was a modest man and humbled by the admiration he received. John was an avid sportsman, he enjoyed fishing, boating, football, golf and softball. He begrudgingly cheered on his Washington Redskins every season, always hopeful that “this would be the year!.” In the warmer months, (when he wasn’t reeling in the next record breaker), he could be found in his garage, building his next masterpiece or working on a Pinterest craft Cindy found for them. He had the reputation with his close neighbors for hosting garage parties, the occasional crab feast or cornhole tournament. John, AKA “Dad”, “Pop Pop”, “Squiddie”, “Johnny Boy”, “Uncle Johnny”, loved spending time with family and friends, as well as enjoying the quiet serenity of the balcony of his Myrtle Beach condo. While most will know and remember John as a quiet and unpretentious man, his close family and friends remember his sense of humor and willingness to help anyone in need. He was a loving, loyal, and genuine man who leaves a legacy of love, humor, wit, music and laughter. A memorial will be held at a later date. Funeral services were provided by Raymond Funeral Service, LaPlata, MD. In lieu of flowers, donations can be made to Chesapeake Hospice, 2505 Davis Road, Waldorf, MD 20603. The family would like to extend their heartfelt gratitude to the nurses and various staff for their devoted care.

The family of John Bryant Bowman Carroll created this Life Tributes page to make it easy to share your memories.

Send flowers to the Carroll family.