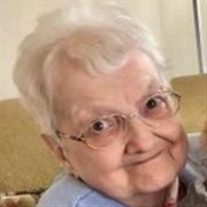 In Loving Memory of Jean Marie Cadrette, R.N. It is with great sadness that we announce the loss of our mother, grandmother, aunt and first responder Jean Marie Bogosta-Cadrette who passed away peacefully in her sleep on the morning of Wednesday, December 30, 2020 at the age of 91. Jean is survived by her daughter, Anne Marie Kuonen, her granddaughters Larissa Anne Kuonen, Karina Michelle Kuonen, and Olivia Rose Cadrette, her niece, Diane Gilbert and her daughter-in-law, Elaine Cadrette. She is predeceased by her father, Nicholas Bogosta, her mother Anna Bogosta, her sister, Helen Bogosta-Gilbert, her brothers Michael Bucko, Michael Bogosta, Chester Bogosta and her son, Robert Jason Cadrette. Jean was born on January 29, 1929 in Binghamton, New York, to Anna Bucko and Nicholas Bogosta. She graduated from North High School in Binghamton and then attended the Pennsylvania Institute of Technology where she became a Registered Nurse. She started her career at Our Lady of Lourdes Hospital, in Binghamton, New York, eventually becoming a head nurse there and later at Sibley Memorial Hospital in Washington, D.C. Afterwards, Jean worked as a civilian nurse for 20 years at Malcolm Grow Medical Center for the Air Force on Joint Base Andrews, Maryland. There, she delivered the latest and most successful cancer treatment options to all of the patients that she cared for at the center’s special oncology unit. She finished her rewarding nursing career at Malcolm Grow, retiring in 1996. Jean highly valued the patients that she interacted with and treated them like family. She embodied a popular saying about nurses: “The definition of a nurse: to go above and beyond the call of duty. The first to work and the last to leave. The heart and soul of caring, who will pass through your life for a minute and impact it for eternity. An empowered individual whom you may meet for only a 12- hour period but who will put you and yours above theirs.” Jean was known for her dedication to patient care and the high level of nursing expertise that she displayed each and every day. Many of her fellow nurses would describe her as a “devoted, knowledgeable and loving nurse who strove to make the patients that she treated feel better both physically and spiritually.” Jean called Upper Marlboro, Maryland home for nearly 35 years, and raised her daughter Anne and her son Robert there. In her spare time, Jean enjoyed gardening, cooking and taking care of her cats, Jasper, Bunny and Patches. She also was an avid reader and liked watching vintage TV shows. Jean will be deeply missed by her friends, family and all who knew her. Additional details relating to her funeral will be released in the days ahead.

In Loving Memory of Jean Marie Cadrette, R.N. It is with great sadness that we announce the loss of our mother, grandmother, aunt and first responder Jean Marie Bogosta-Cadrette who passed away peacefully in her sleep on the morning of Wednesday,... View Obituary & Service Information

The family of Jean Marie Cadrette, R.N. created this Life Tributes page to make it easy to share your memories.