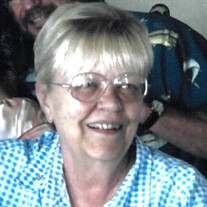 Janet Gale Bass was a caring wife, mother, grandmother, great grandmother, sister, and friend. She made her transition to heaven peacefully on November 7, 2021 at the age of 81. Janet was born to the late Galen and Eleanora Summers on May 22, 1940 in Harrisonburg, Virginia After graduating from Suitland High School in 1958, Janet began her career working for the Library of Congress and later, the Department of Health, Education and Welfare. One day, while filing books at the Library of Congress, Janet found a true hidden treasure staring at her from the shelves: her soulmate and the love of her life, Gus Bass. The loving couple married on March 7, 1959 and remained together until Gus’ passing earlier this year. Soon after they married, Janet and Gus were blessed with their only daughter, Lisa, and Janet would embark on her true passion of becoming a full-time mother. The only thing that brought her more joy was becoming a grandmother to her only granddaughter, Ashley, and great grandmother to Ryleigh Gale and Cole Miller. Janet enjoyed many activities such as quilting, crocheting, cross stitch, and had a talent for decorating the most beautiful Christmas trees. She loved her local sports teams and was a lifelong Redskins fan who held season tickets for many years. Janet is survived by her daughter, Lisa Jean Gilbert (Bruce); granddaughter, Ashley Nicole Clayton (William); and great grandchildren, Ryleigh Gale and Cole Miller. She is also survived by her nephew, Donnie Summers (Kimberly), who she thought of more as a son, and numerous sisters and brothers-in-law, nieces, nephews, and great nieces and nephews. In addition to her parents, Janet is preceded in death by her brother, Jimmy David Summers (Joanne). A Celebration of Life will be held later for Janet and Gus Bass. In lieu of flowers, the family would like donations to be made to the Clements Cuties Foundation (https://www.clementscutiesfoundation.org/) in honor of the care provided to Janet by Grace Senior Care.

Janet Gale Bass was a caring wife, mother, grandmother, great grandmother, sister, and friend. She made her transition to heaven peacefully on November 7, 2021 at the age of 81. Janet was born to the late Galen and Eleanora Summers on May 22,... View Obituary & Service Information

The family of Janet Gale Bass created this Life Tributes page to make it easy to share your memories.

Send flowers to the Bass family.