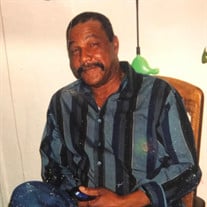 United States Military Veteran James Edward Dorsey, 71, of Waldorf, Maryland, entered eternal rest on Saturday, January 1, 2022, peacefully at his home. He was born on August 15, 1950, to the late Harriet Johnson Dorsey and the late Joseph Plater in Charles County, Maryland. James was affectionately known as “Boot” was educated in the Charles County School Systems, graduating from the LaPlata High School. Boot was a man of many trades. He was a Certified Diesel Mechanic and during his career he worked for Clinton Christian and was a Commercial Truck Driver for various companies. Once he retired from being a mechanic, Boot could not sit around not having anything to do so he began a second career as a school bus driver for the Keller Bus Service where he worked until he departed this earthly life. Boot had a fierce passion for cars and auto mechanics. You could always find him working on cars at his home garage for family and friends; he was also in the business of buying and selling cars for friends, and even a little drag racing. He enjoyed listening to music as it was part of his heart and soul. He had a love for old school R&B artists. To name a few, he especially loved the Queen of Soul, Aretha Franklin, Gladys Knight, and James Brown. Boot was famous for turning on every speaker in the house and playing music throughout the house, especially in his garage, where often times he entertained his friends. He loved the games of sports. Boot was a WWF wrestling fanatic and his favorite football team was the Dallas Cowboys, he also enjoyed the sandlot baseball games on Sundays, following the Wicomico Hawks. Boot loved God, his family, his garage tools, and NEVER bit his tongue. He said what he had to say without hesitation and stood by his word. Boot was strong minded and strong willed- and would help anyone, anyway he could. He is preceded in death by his parents; two sons, Nicholas Vaseleo Wade and Aaron Joshua Thompson; three sisters,Dorothy Dorsey, Lucille Briscoe (Robert) and Francis Louise Gant; three brothers, John Louis Dorsey (Elizabeth), George William Dorsey (Eva) and Charles Dorsey (Ellen). He leaves to cherish his memories, his son Eric Cole, and two daughters Candice Dorsey and Carla Wade, a grandson BJ Thomas, and his fiancé Rosalee Quade; his dog Roscoe; two brothers David Lee Gant and Joseph Gant, and a sister Mary Whalen. Two nephews-like brothers David “Diddy” Dorsey and Joseph “Buck” Dorsey; and his nephew Michael Briscoe who was there to help as his health was declining; and a host of nieces and nephews, cousins and special friends, Charles Thomas, Abby Cole, Phil Ford, and Jim Brown. Helping others in a dedicated, loyal and hardworking manner kept Boot a very popular and cherished brother, uncle, father, grandfather and employee. We love him and he'll forever be in our hearts. We know he is up in heaven bossing everyone around. He will be greatly missed by many. May he rest in heavenly peace ACKNOWLEGEMENTS The family deeply appreciates all the calls, visits, cards of sympathy, flowers and any other acts of kindness shown to them during the passing of their beloved Boot. Special thanks to Rosalee Quade, how profoundly grateful we are for the love you bestowed upon our father. Your love and support for our family has been very much appreciated during this time of bereavement.

The family of James Edward Dorsey created this Life Tributes page to make it easy to share your memories.

Send flowers to the Dorsey family.