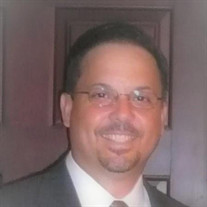 Henry Font passed away on August 26, 2021 at the age of 58 after a courageous battle with cancer. He kept his positive attitude and fighting spirit until the end. He was born in Puerto Rico to Henry and Maria Font and was the oldest of six siblings: Hans, Haydee, Harvey, Howard and Hugo. After graduating with a degree in Mechanical Engineering, he landed his first job at NSWC located in Indian Head, Maryland. He then found his dream job working for the United States Coast Guard/ National Pollution Funds Division located in Washington, DC. As a proud Eagle Scout, he made a point to always help anyone with whatever he could, never second-guessing his decision. His interests were as wide as his heartwarming smile. He loved the game of soccer. He played for his college varsity team and kept his involvement with the sport later in life as a coach and as a referee. He became a Master Scuba diver and found a new passion in underwater photography. He volunteered with the Accokeek-based non profit Kids Into Discovering Science and their human-powered submarine projects. He assisted dozens of youth by acting as KIDS' dive safety officer for submarine pool testing helping to develop a project-specific underwater communications system to be used at the KIDS dive team International Submarine Races held at NSWC, Carderock. He frequently helped other race teams who needed divers and acted as impromptu translator for Spanish speaking teams. Henry was the love of my life and I will miss each and every day without him by my side. He leaves a huge hole in the hearts of his family, Yuke and Yayo and all of his friends. We stayed together in the good times and the bad times as we promised to each other that we would 34 wonderful years ago. Thank you Henry for your unconditional love! Until we meet again, Millie There will be a Memorial Service on Thursday, September 2, 2021 from 5-7PM at Raymond Funeral Service Chapel, 5635 Washington Avenue, La Plata, Maryland 20646. In lieu of flowers, memorial contributions are asked to St. Jude Children's Research Hospital, 501 St. Jude Place, Memphis, TN 38105-1942. Masks are required.

Henry Font passed away on August 26, 2021 at the age of 58 after a courageous battle with cancer. He kept his positive attitude and fighting spirit until the end. He was born in Puerto Rico to Henry and Maria Font and was the oldest of six... View Obituary & Service Information

The family of Henry Luis Font III created this Life Tributes page to make it easy to share your memories.

Send flowers to the Font family.