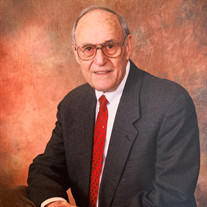 Godwin C. Rogerson, lovingly known as “G.C.”, passed away peacefully early Monday morning, February 15, 2021 at his home in La Plata, MD. G.C. is survived by his wife, Faye Rogerson; his children, Grant, Beth, and Joe; his step-daughter, Cindy; his siblings Billy, Elizabeth Anne, and Zeb; his grandchildren, Abby, Maddie, Emma, Kiley and Josie; and his step-grandchildren, Sam, Maggie, and Jonah. He is predeceased by his parents, Chester and Elizabeth, and his eldest brother Chet. He married his bride of 49 years, Faye, in Ayden, NC. He loved the Lord and was a faithful servant to Grace Baptist Church for the last 49 years of his life, where he served as both deacon and treasurer. Remaining a dedicated Husband and Father was a true product of commitment to his faith. G.C. was born on February 19, 1940 in his family home in Union, North Carolina. He graduated from North Carolina State with an Engineering Degree. His 58-year career began as a civil servant. He worked as a mechanical engineer for the General Services Administration (GSA) in the Inspection Section, in Washington, DC. He retired after 34 years of government service and went to work for several contractors and even the local community college in support of various electrical and mechanical systems (notable locations include the College of Southern Maryland and the new Treasury building downtown). He worked another 24 years and only recently resigned from his last employer on January 1, 2021. He often spoke of, and remained in contact with many of his coworkers from his long and varied career, and it was clear that they considered him not just a colleague, but a friend. He had a wonderful sense of humor and was very quick-witted. His throat cancer, and resulting laryngectomy in 1994, did little to rob those around him of his jokes and quips that came so easily. Those around him always knew they would walk away from any conversation with a smile. He loved fishing, which was a pastime that was more frequently enjoyed in his younger years. In a clear effort to hold onto some semblance of that pastime, he was always eager to procure a new fishing boat. The most recent exploit involved a 26-foot cubby cabin with a blown outboard engine, that he felt was worth a try to repair; a daunting task that was not for the faint of heart. Repair soon shifted to replacement. A “short” trip to the shores of North Carolina secured a 220 HP Yamaha outboard engine, which created the now fully functional fishing vessel, also known to the family as the “lawn ornament”. In this case, pride of ownership was the obvious goal, as it has yet to see water. Clearly this is a classified ad for a boat disguised as an obituary (smile). G.C. defined and measured his success based on the success of his children. He earned their love through careful discipline that always directed them to the right and honorable way. Today, all of his children will attest that one of the greatest things they can do is to follow his life’s example of selflessness and steadfast integrity. Finally, G.C. was an exceptionally intelligent man. It was difficult to find a topic on which he was not knowledgeable, or a word he could not define. His kind and generous heart touched so many. He will be missed beyond words. Given the current risks associated with gatherings, no service is planned at this time.

The family of Godwin C. Rogerson created this Life Tributes page to make it easy to share your memories.

Send flowers to the Rogerson family.