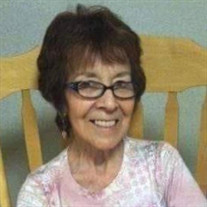 Genevieve “Genny” Brooks, 89, of White Plains, MD, passed away on December 28, 2020. Genny was born on April 14, 1931, to James and Isabelle St. Arnold in Baraga, MI. After graduating from Baraga high school, she left home to attend Haskell Indian College in Lawrence, KS. After graduation, she went to work for the Bureau of Indian Affairs in Washington, DC. Genny worked with Indian Affairs for 30+ years and handed her passion for Indian country down to her children and grandchildren who continue to follow in her footsteps working for the BIA. While working in DC, she met Mark Norman Brooks, whom she married and had four children: Gayle, Darrell, Theodore “Ted”, and Jeannine. Genny retired in 1998 which allowed her more time to spend with her grandchildren and later her great-grandchildren. She enjoyed spending time at the LaPlata Senior Center to exercise and as a member of the Two in One Club. She also enjoyed a good glass of wine, gardening, dancing, and cheering on the Washington Nationals, the Baltimore Ravens, and most of all the Washington football team. Spending time getting together and laughing with her family was always her greatest pleasure. Genny was preceded in death by her husband Mark Brooks, son-in-law William “Billy” Shumaker, her parents, six sisters, and five brothers. She is survived by her brother Ulyses “Sam” St. Arnold [Audrey], sister Julie Brown; children: Gayle Shumaker, Darrell Brooks, Theodore “Ted” Brooks [Melissa], Jeannine Brooks [Harold]; grandchildren: Clayton Fortney [Ashley], Dale Brooks, Melissa Fortney [Richard], Miranda Brooks, Scott Brooks; step grandchildren: Steven Byus [Sarah], James Byus, III, Josh Shumaker, Amanda Sansbury [Scott], Kelly Kolb [Manning]; and 14 great-grandchildren. In lieu of flowers, please consider a donation to the National Kidney Foundation. At this time all services will be private due to the Covid-19 pandemic.

The family of Genevieve St. Arnold Brooks created this Life Tributes page to make it easy to share your memories.

Send flowers to the Brooks family.